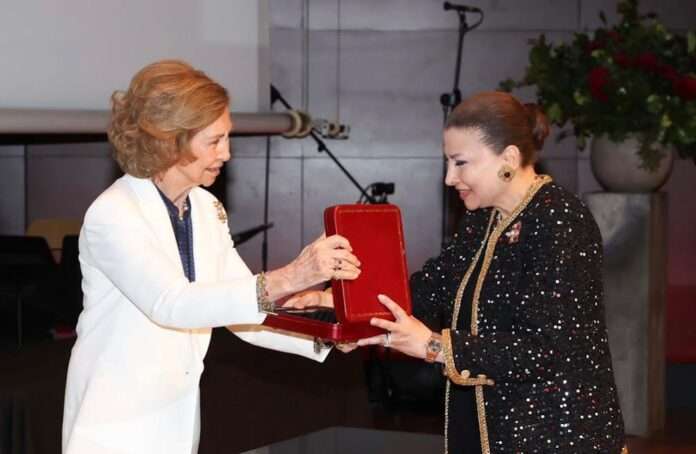 Her Excellency, the first in the Arab world to receive the honourable distinction, dedicated her accomplishments to H.H. Sheikha Fatima bint Mubarak

Madrid- Spain: Her Excellency Huda Alkhamis-Kanoo, Founder of the Abu Dhabi Music & Arts Foundation (ADMAF) Founder and Artistic Director of Abu Dhabi Festival (ADF), became the first Arab individual to receive the Medal of Honour, the highest distinction awarded by the Reina Sofía School of Music from Her Majesty Queen Sofia  of Spain

The prestigious award is presented to individuals and institutions in recognition of their work in support of the development of music culture and education, as well as for their outstanding support to the School.

Her Excellency founded the Abu Dhabi Music & Arts Foundation in 1996 and Abu Dhabi Festival, of which she is also Artistic Director, in 2004.

She received the award in recognition of her dedication for inspiring young minds, promoting innovation in culture, and engaging communities in shared experiences to bring people together.

The ceremony opened with a speech by Paloma O’Shea, Founder and current President of the Reina Sofía School of Music, and winner of the 2021 Abu Dhabi Festival Award for her outstanding lifetime support of classical music.

Upon receiving the Medal, Her Excellency Huda Alkhamis-Kanoo said: “I would like to dedicate all my accomplishments to Her Highness Sheikha Fatima bint Mubarak, Mother of the Nation, whose unwavering support empowers women throughout the UAE. I am deeply honoured and humbled to receive this distinction from Her Majesty Queen Sofia and I am grateful to Mrs Paloma O’Shea for her tireless commitment to music education.

“In just 30 years, the Reina Sofia School of Music has reached a status on par with renowned international institutions as a world leader in music education. We are immensely proud to have collaborated with the School to support initiatives and opportunities like the first-ever European tour of its Freixenet Symphony Orchestra.  To be awarded the Medal of Honour is a testament to ADMAF’s commitment to investing in creative potential and advocating for cultural diplomacy both at home and abroad.”

Commenting on Her Excellency’s commitment to music and the arts, Mrs. O’Shea said, “I am impressed with the cultural promotion work that HE Huda Alkhamis-Kanoo has been carrying out for years. Through ADMAF and many other initiatives, she has turned Abu Dhabi into an international cultural reference point. She has my full admiration”.

Upon receiving the Medal, Her Excellency Huda Alkhamis-Kanoo said: “I would like to dedicate all my accomplishments to Her Highness Sheikha Fatima bint Mubarak, Mother of the Nation, whose unwavering support empowers women throughout the UAE”.

His Excellency Majid Al Suwaidi, Ambassador of the UAE to Spain, who was present at the ceremony said “We are honored to see H.E. Huda Alkhamis-Kanoo being recognized by the Reina Sofía School of Music, which under its Founding President H.E. Paloma O’Shea became a benchmark institution in the teaching and promotion of music.

“For many years now, H.E. Huda Alkhamis-Kanoo has been a crucial actor in the creation and development of cultural collaborations between the UAE and Spain, and we are grateful to Her Majesty Queen Sofia of Spain for granting Her Excellency with this recognition of her work and friendship. I am certain that such renowned institutions will keep working together and bringing the people of our countries even closer”.

The relationship between ADMAF and the Reina Sofía School of Music began in 2015 when the Foundation signed an agreement with the School during Her Excellency’s visit to the 18th Paloma O’Shea International Piano Competition in Santander, Spain, to collaboratively support intercultural exchange through classical music and the performing arts, allowing the UAE to become the first Arab country to participate in its activities.

The 2021-2022 academic year marks the 30th anniversary of the Reina Sofía School of Music’s founding. The ceremony concluded with a concert by the School’s Freixenet Chamber Orchestra conducted by the award-winning classical pianist and conductor Sir András Schiff who, along with Her Excellency and Spanish Economist José María Álvarez-Pallete López, was also a recipient of the Medal of Honour.

Abu Dhabi Music and Arts Foundation (ADMAF) was established in 1996 as one of the earliest cultural foundations in the Gulf region and Arab World.  ADMAF supports the sustainability and creativity of the cultural industry and contributes to enriching Abu Dhabi as a Cultural beacon.