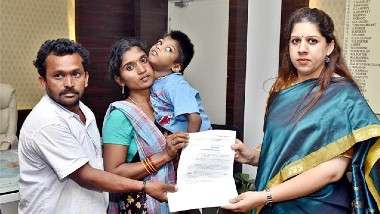 Moved by the condition of a boy suffering from mental disability and his mother’s distress, The Chief Minister directed Kakinada district Collector Dr.Kritika Shukla to grant immediate financial assistance and disability pension.

KAKINADA: In a matter of two hours, Andhra Pradesh Chief Minister Jagan Reddy sorted out the problem of a mother who had been seeking help from various government departments since the last five years for her mentally retarded son, a report in the Deccan Chronicle, says.

Moved by the plight of the mother Nakka Tanuja and her 10-year-old son Dharma Teja, the CM ordered immediate financial assistance and a monthly pension for the boy.

Jagan landed in Tuni of East Godavari by helicopter on Thursday, August  4,  and then moved to Payakaraopeta by road to attend a marriage. As he alighted from his  vehicle, a crowd gathered at the spot.

Tanuja of Mandapam village in Sankhavaram mandal of Kakinada district, held up her 10- year-old son in order to attract the CM’s attention.

As luck would have it, Jagan noticed her and immediately went up to her. She told the CM that she had been trying for the past five years to get a monthly pension for her mentally retarded boy. She was from a poor family and unable to support the boy, she added.

Touched by her plight, Jagan directed the Kakinada collector Kritika Shukla to grant immediate financial assistance and a monthly pension for the family. The CM gave an assurance to the mother that she would get immediate help.

As luck would have it, Jagan noticed her and immediately went up to her. She told the CM that she had been trying for the past five years to get a monthly pension for her mentally retarded boy. She was from a poor family and unable to support the boy, she added.

The collector arranged a car for the woman and her family members to the collector’s office and processed the papers fast. An immediate financial help of Rs 10,000 was extended to the boy. From next month, the boy will get a monthly pension.

The collector also presented a wheelchair to the boy. It all happened in a matter of two hours.

The mother told Deccan Chronicle: “Having come to know that Jagan is coming to Payakaraopeta, I decided to meet him. Fortunately, I could meet him and present my case before him,’’ she said.

Her husband Nakka Chakram is a farm worker and they have a daughter, Sindhuja, studying in Class VII and two sons — Dharma Teja (10) and Karthik (7), studying in a government school at Mandapam village.

She said that by birth, Dharma Teja was mentally retarded and was not even able to recognise her as his mother.

Tanuja said her second son Karthik was also suffering from a urinary infection. Even after three surgeries his health problem remains as it is. She requested the officials to help her second son get better medical treatment.