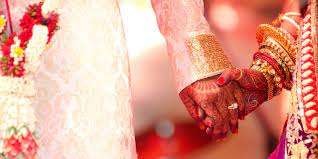 A recent case of an Indian boy marrying Moroccan girl grabbed media attention in India and abroad. The boy Avinash Dohre from the Indian city of Gwalior in Madhya Pradesh met the girl Fadwa Laimali from Morocco on some social media platform. After three years of struggle in convincing parents from both sides and clearing legal complications, Avinash and Fadwa got married under Common Marriage Act in front of an Additional District Magistrate in Gwalior in January 2022.

Even though Avinash does not come under Non-Resident Indian (NRI) category, there must have been certain legal requirements which would have involved the Indian mission in Morocco to get a go ahead for the marriage. Had Avinash been an NRI residing in a country other than India, the procedures would have been different.

It is pertinent in this background to understand the legalities of marriages being performed in other countries in which one party is an NRI and other is a non-Indian or both are NRIs.

REGISTRATION AND SOLEMNIZATION OF MARRIAGE:

Under the Foreign Marriage Act, 1969, an Embassy is authorized to solemnize marriages of citizens of India residing abroad.

A) Following are the requirements when ONE PARTNER is Indian, and the OTHER PARTNER is a Foreigner:

2) A letter from the Embassy of the country to which the foreign partner belongs, stating that the Embassy does not have any objection to the marriage of its national.

3) Photocopies of the passports, names, addresses & copies of identity documents of parents of groom & bride. Passport copies and ID copies of three witnesses in the country of residence.

4) Passport copies, ID copies of country of residence and five passport size recent colour photographs in respect of each partner.

7) Marriage fees is to be deposited at the time of submission of the Notice of Intended Marriage (Form8C.pdf   |Form8C.doc  ), and the other documents listed at Sl. 1 to 5 above, at least thirty days prior to the proposed date of marriage.

1) An advertisement in the newspapers (both in English and in the native language) in India widely read in the hometown of the partners, giving the name/address and other particulars of the boy/girl, announcing their intention to marry and that if anyone has any objection to the marriage, he/she may contact an Embassy of India. A similar advertisement is also to be got published in one country of residence (foreign country) newspaper, which is widely read, on the same lines. Original clippings of these newspapers are to be submitted at the Embassy.

2) Photocopies of passports & IDs of both partners & three witnesses. Copies of identity documents (reflecting their addresses) of parents of the groom & bride.

3) Five recent passport size colour photographs in respect of each of the partners.

4) Singleness/bachelorhood certificate in respect of both the partners from a competent court in India. These certificates should be duly attested by the Ministry of External Affairs, Govt. of India.

6) Marriage fees is to be deposited at the time of submission of the Notice of Intended Marriage (Form8C.pdf |Form8C.doc  ) and the other documents listed at Sl. 1 to 5 above, at least thirty days prior to the proposed date of marriage.

*Note: – An additional surcharge (depending on country’s Indian Embassy) is levied on each Consular Service as contribution towards the Indian Community Welfare Fund (ICWF).

Marriage registration by the Embassy of India is subject to approval of the documents by the competent authority.

Thus anyone planning marriage while living away from India as an NRI should keep a checklist ready to avoid last minute hassles and make the event an enjoyable moment.

(The author writes for PRAVASI SAMWAD without any monetary benefits.)