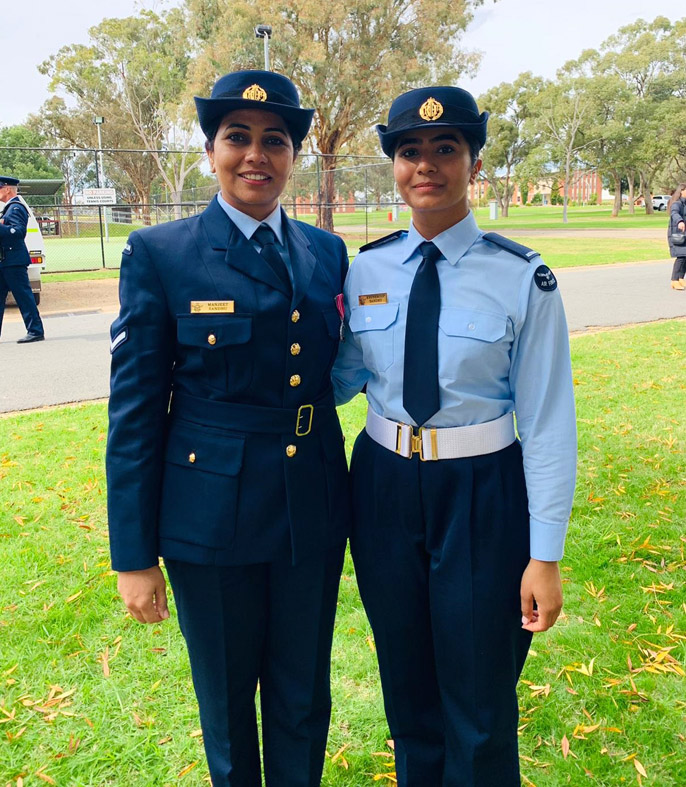 Gursahib Singh, Khushroop’s maternal uncle, said it was a double delight for the family. “Manjit and Khushroop are the first mother-daughter duo from Punjab who have got an opportunity to serve in the Air Force of any other country. They have set an example for others.”

Five years after Manjit Kaur from Muktsar, Punjab, got selected in the Royal Australian Air Force (RAAF), her daughter Khushroop Kaur Sandhu, has also made a mark by getting enlisted as an officer in the force, a report in The Tribune, Chandigarh, says.

Gursahib Singh, Khushroop’s maternal uncle, said it was a double delight for the family. “Manjit and Khushroop are the first mother-daughter duo from Punjab who have got an opportunity to serve in the Air Force of any other country. They have set an example for others.”

He said after completing Class XII, Khushroop cleared the RAAF test. She has chosen the cybercrime wing after finishing her training.

“People should not consider girls any less than boys. We have never stopped the women of our family from doing anything,” said Paramjit Kaur, Khushroop’s grandmother.

Khushroop’s mother Manjit is working as an aircraftwoman in the medical wing of the RAAF at the Darwin air base. Roop Singh Sandhu, her husband, is also an Australian Government employee. The couple had gone to Australia on a study visa in 2009. After getting the Australian PR in 2013, they took their two daughters along with them.

Manjit Kaur (36) from Muktsar was recruited as an aircraftwoman in the medical wing of Royal Australian Air Force (RAAF). Before her recruitment, she underwent a three-month physical training there.

She hails from a family of a marginal farmer of Bhala Saryamalwala village in Ferozepur. She married Roop Singh Sandhu of Muktsar in 2002. He is employed with the Australian government and drives a truck.

“Our maternal uncle, who retired as a Colonel from the Indian Army, was Manjit’s inspiration to serve the armed forces,” said Manjit’s brother Gursahib Singh, an employee in the judicial courts of Gidderbaha.

“She cleared the physical test twice to get selected in the RAAF. She got success on December 6,” he said.

About Manjit’s job, Gursahib said: “Manjit has worked at a community welfare and disability centre in Brisbane. She has done some study in this field as well. These things helped her get the job”.