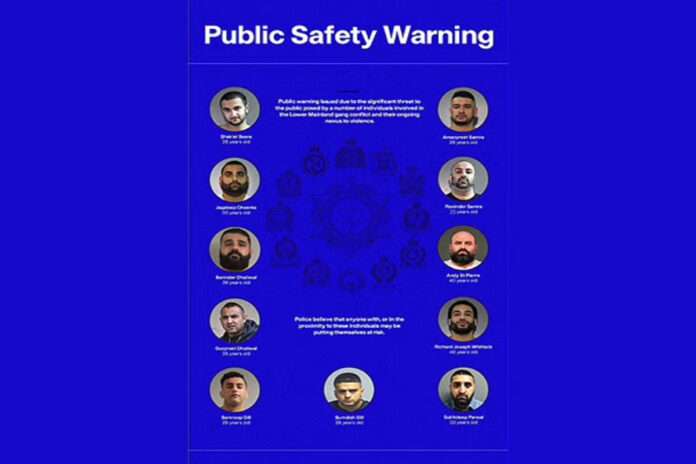 A list of the most dangerous offenders in Canada associated with severe violence has been released by the Canadian Police. Nine of the eleven males on the list are of Indian descent

“A public safety warning has been issued in partnership with @VancouverPD, @BCRCMP identifying 11 individuals who pose a significant threat to public safety due to their ongoing involvement in gang conflicts and connection to extreme levels of violence,” Combined Forces Special Enforcement Unit of British Columbia (CFSEU-BC) tweeted.

A list of the most dangerous offenders in Canada associated with severe violence has been released by the Canadian Police. Nine of the eleven males on the list are of Indian descent. The police warned the public to stay away from these individuals. The warning was issued on Wednesday by the CFSEU-BC, Vancouver Police, and BC Royal Canadian Mounted Police, according to newsable.asianetnews.com.

As a result of their continued engagement in gang disputes and connections to very violent situations, 11 people have been identified as posing a serious threat to public safety, according to a tweet from CFSEU-BC.

The warning came after Meninder Dhaliwal, who was on the 11-man list from the previous year, was shot and killed in Whistler late last month in broad daylight

The police issued a warning that anyone around these individuals is placing themselves at danger. The named guys might be the target of violence from rival gang members, according to CFSEU Assistant Commander Manny Mann, who also noted that the listed men pose a threat to their friends and families as well as onlookers. According to him, “We want British Columbians to recognise their faces.”

The warning came after Meninder Dhaliwal, who was on the 11-man list from the previous year, was shot and killed in Whistler late last month in broad daylight. According to the police, his brother Harpreet was the victim of a shooting in Vancouver’s Coal Harbour last year. Gurpreet Dhaliwal, a 35-year-old brother, is also included on the list this year.