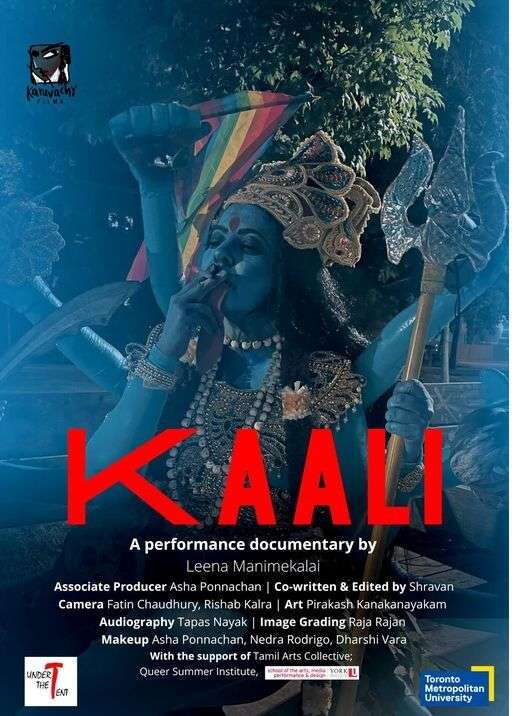 TORONTO: Following complaints from the leaders of the Hindu community in Canada about “disrespectful depiction of Hindu gods on the poster of a film showcased as part of a film festival at Aga Khan Museum Toronto, the Indian High commission in Canada on Monday, July 4, urged the organisers to withdraw all provocative material, a  report in The Tribune,  Chandigarh,  says

In a statement here the Indian High commission in Canada while referring to complaints in respect of objectionable depiction of Goddess Kali on the poster of a documentary “Kaali” by Toronto based filmmaker Leena Manimekalai said, “Our Consulate General in Toronto has conveyed the concerns to the organisers of the event. We are also informed that several Hindu groups have approached authorities in Canada to take action. We urge the Canadian authorities and the event organisers to withdraw all such provocative material.”

In a statement, the High Commission said that they have received complaints from leaders of the Hindu community in Canada about the “disrespectful depiction of Hindu Gods on the poster of a film showcased as part of the ‘Under the Tent’ project at the Aga Khan Museum, Toronto.”

The Madurai-born, Toronto-based filmmaker Leena Manimekalai is facing a lot of backlash after she released the controversial poster of her documentary titled ‘Kaali’ on social media.

The poster shows Goddess Kali smoking a cigarette with one hand while in her other hand she can be seen raising the Pride flag, depicting the LGBTQIA community. The film is being showcased at “Under the Tent” project at the Aga Khan Museum in Toronto.

Responding to criticism, Menamekalai said she had nothing to lose.

“Till the time I live, I wish to live with the voice that speaks what I believe without fear. If the price for that is my life it can be given,” Leena wrote in a Twitter post in Tamil.

The poster shows Goddess Kali smoking a cigarette with one hand while in her other hand she can be seen raising the Pride flag, depicting the LGBTQIA community. The film is being showcased at “Under the Tent” project at the Aga Khan Museum in Toronto.

The controversy erupted after filmmaker shared the poster of the film on social media that depicts a woman dressed as Goddess Kaali smoking a cigarette in the poster.

Filmmaker Manimekalai also landed in legal trouble after a police complaint was filed against her in Delhi for hurting religious sentiments through the poster. The filmmaker responded to all the charges saying she will give her life to be a voice ‘without fear’.

Meanwhile in India, The Delhi and Uttar Pradesh police have  registered FIRs against filmmaker Leena Manimekalai on Tuesday for “hurting religious sentiment” with the poster of her new documentary film ‘Kaali’.

Delhi police stated that its IFSO unit filed an FIR under IPC sections 153A and 295A regarding the controversial poster pertaining to the film Kaali. The UP police filed the FIR on charges of criminal conspiracy, offense in place of worship, deliberately hurting religious sentiments, and intention to provoke breach of peace against the filmmaker for the disrespectful depiction of Hindu Gods.