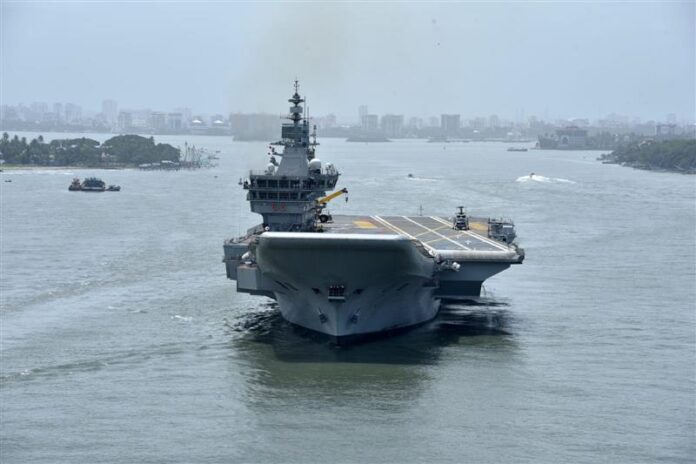 It is the largest and most complex warship ever to be designed and built in India, puts country in select group of nations

New Delhi: The first indigenously made sea-going aircraft carrier, the Vikrant, is set to be commissioned into the Indian Navy next month, the Indian Navy said on Sunday, July 10.

The fourth and last phase of sea trials for the Vikrant has been successfully completed on Sunday. The warship conducted integrated trials of equipment and systems onboard including some of the aviation facilities on board.

The first trial was successfully completed in August last, followed by second and third phases of trials in October 2021 and January 2022, respectively.

The Vikrant is the largest and most complex warship ever to be designed and built in India. With this India joins a select group of nations having niche capability to indigenously design, build and integrate a state-of-the-art Aircraft Carrier.

US, UK, Russia, Italy, France, Japan and China have such capacities

The warship’s endurance testing of propulsion machinery, electrical and electronic warfare suites, deck machinery, lifesaving appliances, navigation and communication systems have been tried out at sea.

The fighter jets that will operate from the deck of the carrier — are to be tested using the Russian MiG 29K jets—but after the warship is handed over to the Navy.

The 44,000 tonne ‘indigenous aircraft carrier (IAC) has been made at the state-owned Cochin shipyard at Kochi, Kerala.

The commissioning is happening in the backdrop of India-China race off to expand their naval strength. China has two operational aircraft carriers – the Liaoning and the Shandong. Last month, it launched another one called the Fujian that would take some three years for commissioning.

India has one operational carrier, INS Vikramaditya, purchased from Russia and the upcoming Vikrant. The plan for the third carrier is, so far, has not been cleared by the government.

Besides India and China, Japan and South Korea are adding carriers to their fleets as the Asian countries race to project power at sea.