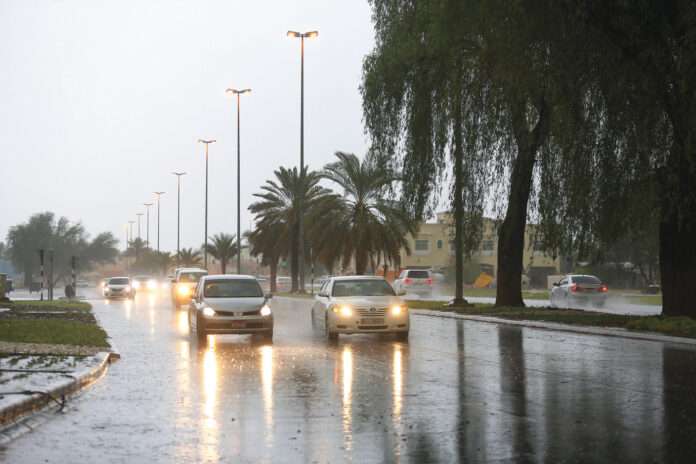 DUBAI: The National Centre of Meteorology in the United Arab Emirates has reported heavy rain and hail in certain parts of the country, a report in the Khaleej Times, says.

It has posted videos of rains in Al Ain. The authority has said that it has rained in the following locations – Al Khazna, Al Ain – Dubai Road, Al Ain International Airport and Al Salamat.

The videos show a heavy downpour on roads. Cars are also seen splashing past the camera, indicating that water had collected on the  roads

Authorities have earlier said that residents can expect rains on each day of the Eid Al Adha break. Heavy rains lashed parts of Fujairah last night.

The weather today will be partly cloudy to cloudy in general, the National Centre of Meteorology has said.

Another day of rainfall is expected as there is a chance of rainfall over some internal areas especially east and southward, which may extend over some coastal areas.

Abu Dhabi Police had also called on drivers to be cautious and follow the changing speed limits displayed on electronic information boards.

Moderate winds will blow with clouds, freshening at times. This will cause blowing dust and sand, reducing the horizontal visibility over exposed areas.

Conditions at sea will be slight to moderate may be rough at times especially with clouds in the Arabian Gulf and slight in Oman Sea.

Oman Tourist sites to be closed due to adverse weather conditions.This decision has been taken as a large number of accidents were reported.

Oman authorities have announced that tourist sites will be closed due to current weather conditions.

The Civil Defence said in a statement to Oman News Agency that the tourist sites are being shut due to heavy rains and increased water levels.

This decision has been taken as a large number of accidents were reported. Aside from that, residents and visitors have not paid heed to warnings and instructions compelling authorities to take action.