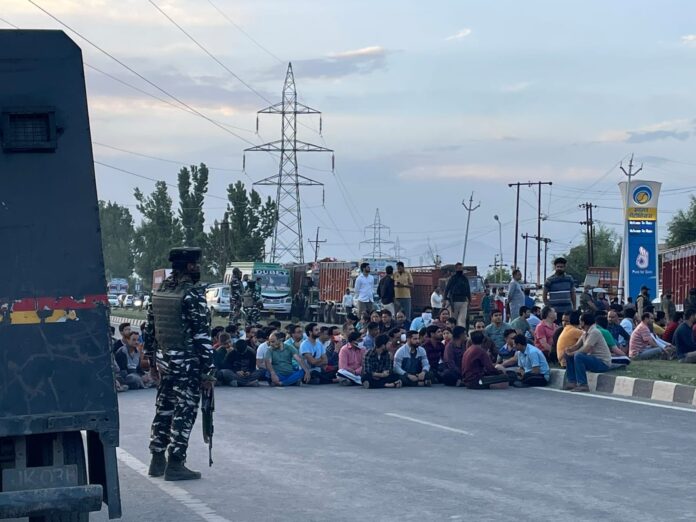 Kashmiri Pandits working in the Valley, most of them under the Prime Minister’s rehabilitation package, on Thursday, May 12, staged protests at different places against the killing of their colleague, Rahul Bhat, by militants in Badgam district,  an IANS report in The Tribune, Chandigarh, says .

The protesting government employees blocked the Srinagar-Jammu highway outside Vessu migrant colony in Anantnag district. They lit candles to register their protest.

Visibly disturbed by the broad daylight killing of Rahul Bhat in a government office during working hours, one of the protesters said: “If rehabilitation costs lives, we will prefer to resign and leave Kashmir forever”.

“We are being made soft targets by militants. They (militants) should also clarify their policy. If they are out to kill all of us, they should tell us clearly. But the fact remains that the government has failed to protect us despite making tall claims”.

During the protests on the Srinagar-Jammu highway, hundreds of vehicles remained stranded for hours.

Visibly disturbed by the broad daylight killing of Rahul Bhat in a government office during working hours, one of the protesters said: “If rehabilitation costs lives, we will prefer to resign and leave Kashmir forever”.

Protests were also held at Sheikhpora, Badgam outside the migrant KP colony where women and male members of the Pandit community sat in the middle of the road in protest.

Vijay Kumar, IGP (Kashmir) visited Sheikhpora Badgam to express sympathy with the colleagues of the slain employee. However, the protesters insisted that he should bring Divisional Commissioner Kashmir to the spot.

Many protesters alleged that the killing of Rahul Bhat at Tehsil office Chadoora was a major security lapse.