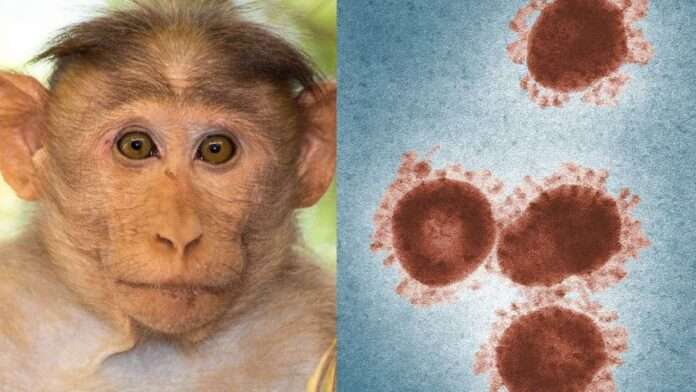 The Monkey BV is caused by macaques, a genus of Old World monkeys that serve as the natural host. While the virus is transmitted by macaques, chimpanzees and capuchin monkeys can also become infected and die. B virus is also commonly referred to as herpes B, monkey B virus, herpesvirus simiae, and herpesvirus B.

The initial symptoms of the Monkey B Virus include fever and chills, muscle ache, fatigue, headache, just like any flu, quite akin to a coronavirus infection. This is then followed by blisters in the wound, shortness of breath, nausea and vomiting, abdominal pain.

Swelling of the brain and spinal cord may follows, leading to neurological and inflammatory symptoms, problems with muscle coordination, brain damage and severe damage to the nervous system.  As the disease goes on to worsen further, it may eventually lead to death. Currently, there is no vaccine to counter the Monkey B Virus.

Macaques, a genus of Old World monkeys,  serves as the natural host for the Monkey BV and chimpanzees and capuchin monkeys too if infected can eventually die.

The first Monkey BV case was revealed in the Chinese Center for Disease Control and Prevention (China CDC) briefing recently. Caused by macaques, a genus of Old World monkeys, the surgeon tried to seek treatment in several hospitals but finally succumbed to the virus in May.  Analysis of the cerebrospinal fluid from the patient indicated alphaherpesvirus infection, according to reports. It is also commonly referred to as herpes B, monkey B virus, herpesvirus simiae, and herpesvirus B.

The virus can survive for hours on surfaces, particularly when moist and is found in saliva, faeces, urine, brain or spinal cord tissue of macaques. While by the virus is low, Besides those exposed to monkeys or their specimens, the risk of getting infected is high among laboratory workers, veterinarians.

Macaques, a genus of Old World monkeys,  serves as the natural host for the Monkey BV and chimpanzees and capuchin monkeys too if infected can eventually die.

The samples from the patient in China was identified as that of Monkey BV and were sent for further sequencing to the National Institute for Viral Disease Control and Prevention (IVDC) of China CDC.

While, human to human transmission of virus is absent, at the same time  contact tracing has given up negative results, even though the Chinese surgeon succumbed to the virus.