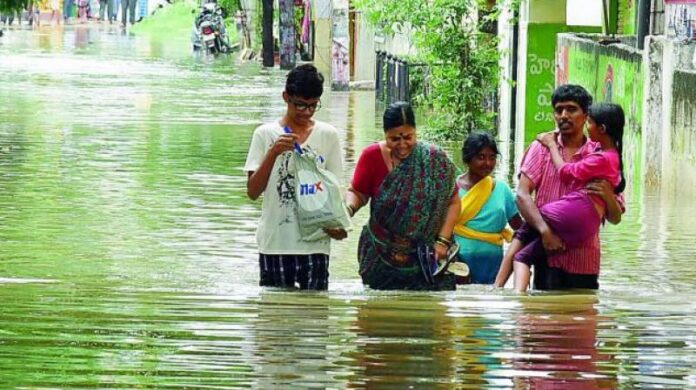 The state government on Wednesday estimated losses incurred on account of recent heavy rains in the state and the resultant floods in the river Godavari at Rs 1,400 crore and is expected to submit a report to the Centre shortly, a report in the Deccan Chronicle, says.

The government plans to seek Rs 1,000 crore as immediate financial assistance from the Centre to undertake relief measures. According to a media statement issued by the Chief Minister’s Office on Wednesday, various departments have submitted preliminary estimates to the state government on the losses from recent heavy rains and floods.

The damage caused to houses and expenditure incurred to evacuate people from these houses was pegged at Rs 25 crore.

Meanwhile, Central teams will arrive on Thursday,July 21,  to assess the damage caused by floods. Official sources said the teams comprising six members will tour for two days and submit a report to the Centre. The teams will also visit Bhadrachalam, Kaleshwaram and Kadem projects which witnessed flood fury.

The Godavari floods have had a major impact on villages in districts like Alluri Sitarama Raju, Eluru, Konaseema, West Godavari and East Godavari.

The villagers are likely to contract diseases like diarrhoea, typhoid and jaundice. There is also a likelihood of spread of viral fevers like dengue and malaria, as also flu and common cold.

The health authorities have identified 41 affected mandals in the five flood-hit districts, where 61 PHCs and three UPHCs have been affected. They have shifted 417 pregnant women to safe camps or hospitals.

The Godavari floods have had a major impact on villages in districts like Alluri Sitarama Raju, Eluru, Konaseema, West Godavari and East Godavari.

The present need is to have more health camps and fever surveys and to position the 104 vehicles for tests and to distribute medicines to the affected people. The health department in coordination with public health, rural water supply, panchayat raj and other departments would ensure sanitation, supply of potable water etc in the flood-affected areas.

District medical and health officers from five districts would help in prevention and control of water-borne diseases. They have been provided with additional manpower, including gynecologists, anaesthetists etc drawn from unaffected districts.