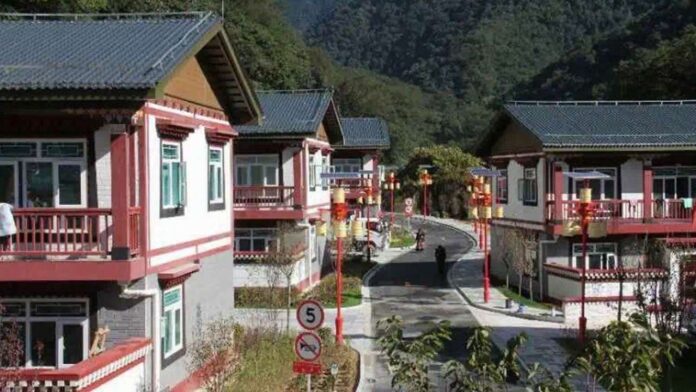 The first reports of the construction of the Chinese village “Pangda”, which is around 2 km within Bhutan, had first appeared in 2020.

New Delhi: In a worrying sign for India, new satellite images show that a village constructed by China in Bhutanese territory near Doklam is now fully occupied with “cars parked at the doorstep of virtually every home”, a report in the Deccan Chronicle, says

The first reports of the construction of the Chinese village “Pangda”, which is around 2 km within Bhutan, had first appeared in 2020. The new satellite images show that China is moving its men into the village to solidify its claim on the disputed territory.

The satellite images accessed by the NDTV news channel shows the village constructed is around 9 km east of Doklam, where the India-China stand-off took place in 2017.

The news report said China has also constructed a motorway from the village along the Amo Chu River that will give China a direct line-of-sight to the Siliguri corridor, which connects India’s Northeast to the rest of the country at Chicken’s Neck.

The satellite images also show China is nearing completion of a second village and starting the construction of another village in the Amo Chu river valley.

“Construction and development by China within the occupied territories of Bhutan adjacent to Doklam could become a future threat to India’s interests in the region, this activity also underlines China’s ability to extend its borders uncontested,” tweeted Damien Symon, a geospatial intelligence researcher at Intel Lab.

The satellite images also show China is nearing completion of a second village and starting the construction of another village in the Amo Chu river valley.

China has also been constructing villages around the Line of Actual Control in Arunachal Pradesh to beef up its defences and also to put pressure on India in the disputed area.

These villages will help China to strengthen the weakening border force by balancing the outflow of residents and promises China with better border surveillance and patrols through a network of herders.

Last year the Pentagon, in a report to the US Congress, had said that in 2020 China had built a large 100-home civilian village inside the disputed territory between China’s Tibet Autonomous Region and India’s Arunachal Pradesh in the eastern sector of the LAC.