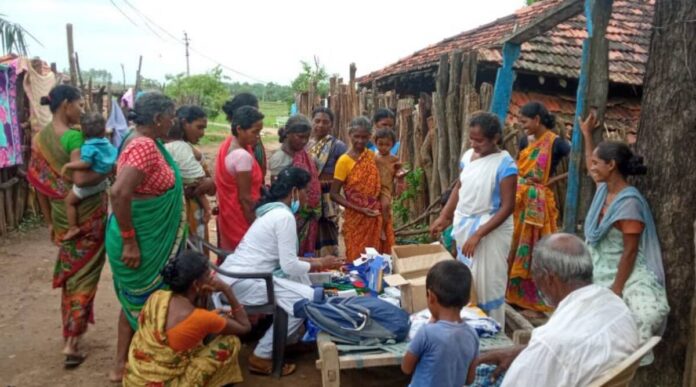 Telangana Chief Minister K Chandrasekhar Rao has announced an immediate financial aid of Rs 10,000 to each flood-affected family, 20 kg free rice per family for two months, compensation for crop damages, and construction of 3,000 houses,  a report in the Deccan Chronicle sdays.

On Saturday and Sunday (July 16 and 17 respectively) , the health department conducted 289 health camps in these districts and 24,674 patients were treated, according to Dr G Srinivas Rao, the director of public health.

After week-long heavy rains led to the flooding of the Godavari river in the north and eastern districts of Telangana, the focus from relief and rescue has now shifted to preventing an outbreak of diseases. At least 15 lives were lost in monsoon-related incidents last week.

Flood waters started receding in some areas in the region from Sunday afternoon, but the overall scenario still remained grim.

Many roads were washed away. Several houses had floodwaters reaching up to their roof level. The waters cut off the transport facility not only in islet villages but also in the plains.

Dairy farmers of the Konaseema have tied their cattle to their sheds or homes to protect them from floodwaters.

The floodwaters inundated 10 colonies in Yanam, a Union Territory enclave of Puducherry. The administration of six districts has focussed its attention on strengthening the weakening bunds, sluices etc.

Many roads were washed away. Several houses had floodwaters reaching up to their roof level. The waters cut off the transport facility not only in islet villages but also in the plains.

A leak was reported from Kothalanka. The people alerted the officials. The Annampalli Aqueduct is posing a problem, as the previous small breaches have not been covered yet. Officials took temporary steps to protect the aqueduct.

Officials distributed food packets to the people in the rehabilitation centres. However, many flood victims in the temporary shelters were finding it difficult to get food. They did not have power supply for the past few days and were not able to recharge their mobile phones.

In Marrigudem, Ramavaram and other villages in VR Puram mandal, people faced shortages of food and drinking water. Eluru Collector Prasanna Venkatesh supplied 3,000 food packets to the victims in Nallakunta, Vanjamvari Gudem, Ganapavaram, Gunuprapalli and Ibrahmimpeta of Nallakunta village and others villages by helicopter.
Many voluntary organisations supplied food to the flood-affected.

Special officer for floods in East Godavari, Arun kumar, has advised local officials to make a survey on the losses to various sectors due to the present floods.

Meanwhile, the Fire department rescued 32 cows and cattle from an islet near Kovvur Gopadala Ghat and brought them to Kotilingala Revu at Rajamahendravaram.

Information minister Venugopala Krishna, industries minister Amarnath, Rajanagaram MLA Jakkampudi Raja and East Godavari collector Madhavi conducted an aerial survey of the flood-hit areas on Sunday.
Irrigation officials were in the grip of a fear that some breaches and erosions might occur at embankments when the floodwaters recede.