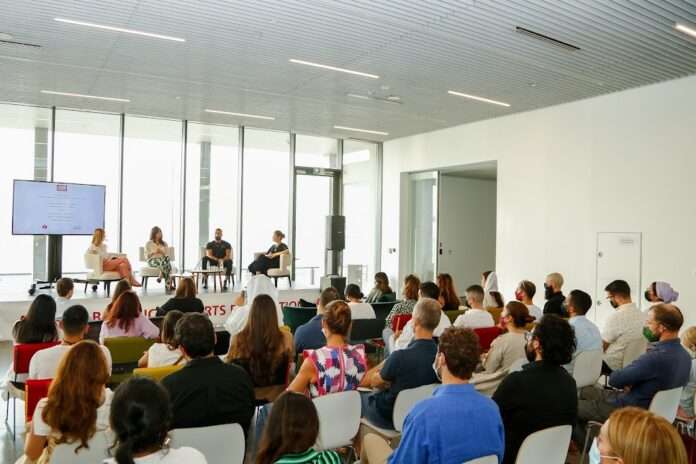 The two books – Art of the Emirates II and Portrait of a nation II  –  document the development of the UAE art scene. The books are a  companion to the Abu Dhabi Festival 2022’s flagship ‘Portrait of A Nation II: Beyond Narratives’ exhibition which ran from January 20 to April 16 at Manarat Al Saadiyat.

In front of a packed audience at the Jameel Arts Centre in Dubai, Maya El Khalil, who curated the landmark exhibition, and Melissa Gronlund, editor of Art of the Emirates II joined writer Maryam Al Dabbagh and artist Walid Al Wawi to explore the thought-provoking question of what is lost in the term “art”. Members of the audience had the opportunity to engage with the panellists in an informative Q&A session and to purchase signed copies of both landmark books at the Art Jameel Shop.

Reflecting on the Dubai launch of the two publications, HE Huda Alkhamis-Kanoo, Founder of the Abu Dhabi Music & Arts Foundation (ADMAF) and Founder and Artistic Director of Abu Dhabi Festival, said “ADMAF’s publications play an essential role in highlighting the creative excellence of the artists and protagonists who have contributed to our nation’s exceptional progress, which has been at the forefront of the Foundation’s mission since its inception nearly three decades ago. Art of the Emirates II and the companion book to our landmark exhibition, Portrait of a Nation II are a tribute to the nation’s impressive rise in the arts scene over the past 50 years and those who have inspired it.

“We are pleased to collaborate with Art Jameel to present the valuable insight of curator Maya Al Khalil and established author and editor Melissa Gronlund on the remarkable transformation of the nation’s artistic landscape as documented in both historic publications.”

“ADMAF’s publications play an essential role in highlighting the creative excellence of the artists and protagonists who have contributed to our nation’s exceptional progress, which has been at the forefront of the Foundation’s mission since its inception nearly three decades ago”.

Portrait of a Nation II, documents more than 100 prominent artworks featured in the ‘Portrait of a Nation II: Beyond Narratives’ exhibition, including 17 commissions, by the over 60 artists who have shaped the artistic and cultural landscape of the nation including Hassan and Hussein Sharif, Nujoom Al Ghanem, Mohammed Kazem, Farah Al Qasimi, and many more. Prefaced by a select group of renowned art and culture figures, the book seeks to map the development of the nation’s art scene and explores how narratives about history are formed in five themes dealing with language, home, exile, and community.

Art of the Emirates II, edited by Gronlund, is structured as a series of round tables, interviews and oral histories, with participants including Zaki Nusseibeh, Sultan Al Qassemi, Mohamed Khalifa Al Mubarak, Kevin Jones, Manal Ataya, and Nawar Al Qassimi among others. The book maps the UAE’s booming art scene and its leading global position as an artistic and cultural hub and is an unprecedented conversation with the people who have written and continue to write the history of art in the UAE.

Art of the Emirates II and Portrait of a Nation II are available in select stores like the Art Jameel Shop and Kinokuniya as well as online on booksarabia.com and amazon for international delivery.

Abu Dhabi Music and Arts Foundation (ADMAF) was established in 1996 as one of the earliest cultural foundations in the Gulf region and Arab World.  ADMAF supports the sustainability and creativity of the cultural industry and contributes to enriching Abu Dhabi as a Cultural beacon.