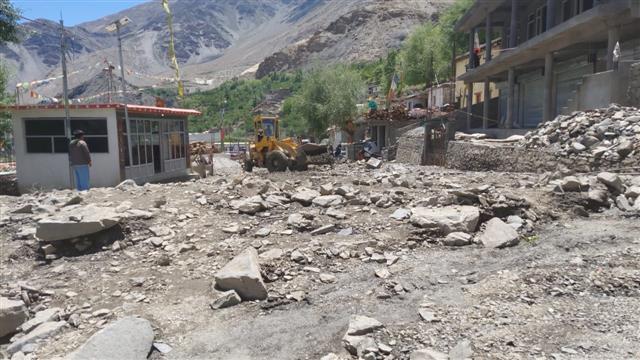 About 25 houses and several water channels were damaged due to heavy rainfall, hailstorms and cloudbursts in Leo, Nako, Maling, Kaa, Chango, Yangthang and Shalakhar areas of Pooh subdivision of Kinnaur district, creating a flood-like situation, late on Tuesday, July 19. However, no loss of life was reported, a report in The Tribune, Chandigarh, says.

The water level in drains has increased and link roads are blocked. According to reports, 20 houses, four public toilets, eight cowsheds and four irrigation water channels were damaged in Shalkhar village.

The property loss is estimated to be over Rs 1 crore. This was the fifth cloudburst in Himachal during the current monsoon season.

A flood-like situation was created in the wake of the downpour in the two villages as river drains were in spate. Four houses and four orchards were partially damaged. The Khango Gompa footbridge was washed away in Chango and six small water canals (four IPH and two local) were badly damaged.

A patch of 700-metre road on the Shimla-Kaza national highway No. 5 was blocked at four places between Chango and Shalakhar. It was restored to traffic almost after 18 hours. However, the road was again blocked near Shalkhar and Gunalla. A house and gardens of locals were damaged as muddy water entered village settlements following cloudbursts at two places last night, said Zila Parishad member Shanta Kumar.