Composer Ihab Darwish first Emirati to be selected as a voting Member of the Grammys. 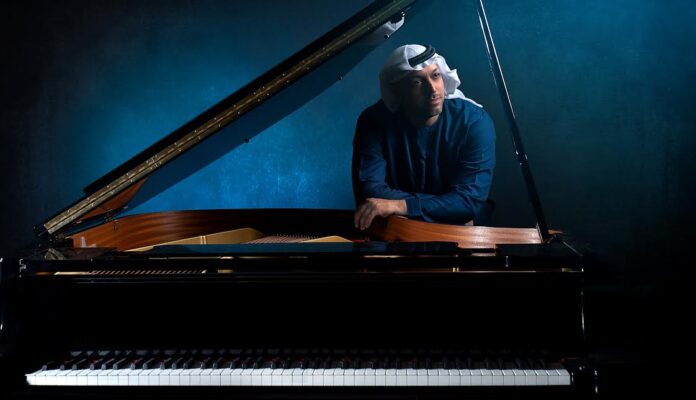 Supported by Abu Dhabi Festival, the renowned composer is known for infusing Eastern and Western tones in his music which is often embedded in Emirati values.

Darwish is among 2,000 new voting members requested to join the world’s leading society of music professionals, whose mission is “to recognise excellence in the recording arts and sciences, cultivate the well-being of the music community, and ensure that music remains an indelible part of our culture”.

The talented composer is known for his skill in combining classical and contemporary styles. His passion for music dates back to his childhood, which has since led to an illustrious career characterised by a number of successful productions.

The Abu Dhabi Festival has been a long-time supporter of Darwish, often commissioning and producing several of his grand-scale works.

Waves of My Life, which premiered in 2018 at Emirates Palace Auditorium with support from Abu Dhabi Festival, was distributed as an album by Universal Music and consisted of nine pieces blending Arabic and Western styles inspired by Darwish’s own memories.

In 2021 he famously brought together 128 musicians in 20 countries capturing the musical traditions and cultures of every continent for the virtual premiere of Hekayat: Symphonic Tales, commissioned and produced by the Festival.

Following the success of both musical projects, the Abu Dhabi Festival commission and production of ‘The Abrahamic Symphony: Unity of Three’, by Darwish featuring Emmy-winning composer John Debney and Academy Award-winning composer David Shire will premiere later this year.

The Emirati and American collaboration is a first-of-its-kind interfaith symphony that brings together top international composers, musicians, and vocal ensembles from Christian, Jewish and Muslim backgrounds in celebration of the opening of the Abrahamic Family House in Abu Dhabi, which will be home to a mosque, a church, and a synagogue.

Commenting on the achievement, H.E. Huda Alkhamis-Kanoo, Founder of the Abu Dhabi Music & Arts Foundation (ADMAF) and Founder and Artistic Director of Abu Dhabi Festival, said “We congratulate Ihab Darwish on becoming the first Emirati voting member of the Grammys. We are proud to have supported the talented composer with the commission and production of his major musical works for Abu Dhabi Festival, including ‘Waves of My Life’, ‘Hekayat: Symphonic Tales’, and the upcoming ‘Abrahamic Symphony: Unity of Three’, which we hope to see nominated for a Grammy in the near future.  We are committed to providing musicians and artists like Darwish with the opportunity to present their work to the world, strengthening Abu Dhabi’s presence in the international creative scene.”

Following the success of both musical projects, the Abu Dhabi Festival commission and production of ‘The Abrahamic Symphony: Unity of Three’, by Darwish featuring Emmy-winning composer John Debney and Academy Award-winning composer David Shire will premiere later this year.

Upon receiving the invitation, Ihab Darwish said: “I am honoured to become a member of the prestigious Grammy Recording Academy and to be among the Emirati musicians and creators receiving international recognition, which is due to the continued support of the culture and creative industries in the UAE by our wise leadership.

Darwish added: “I sincerely thank the Abu Dhabi Music & Arts Foundation and its Founder, H.E. Huda Alkhamis-Kanoo with whom I share a commitment to advance the role of the arts in bringing humanity together, and who has believed in and supported many of my musical projects including the ‘Abrahamic Symphony’, which was exclusively commissioned for Abu Dhabi Festival 2022.”

Following the invitation, Darwish will contribute his valuable insight to vote during the 65th annual Grammy Awards which normally takes place in January of every year.

Abu Dhabi Music and Arts Foundation (ADMAF) was established in 1996 as one of the earliest cultural foundations in the Gulf region and Arab World.  ADMAF supports the sustainability and creativity of the cultural industry and contributes to enriching Abu Dhabi as a cultural beacon.