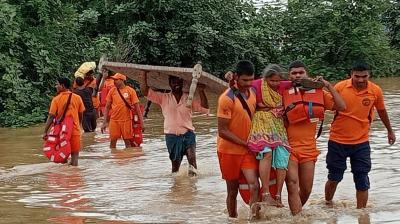 Officials issued the third warning with the water levels touching 17.75 feet on Friday morning. Flood waters reached the Polavaram Project and the backwaters inundated the agency villages in Devipatnam and Polavaram mandals.

KAKINADA: The flood situation in Godavari worsened on a massive scale on Friday, July 15, as 21,32,140 cusecs of excess water was discharged into the Bay of Bengal from the Sir Arthur Cotton Barrage at Dowleswaram by 8 pm, a report in the Deccan Chronicle, says.

Officials issued the third warning with the water levels touching 17.75 feet on Friday morning. Flood waters reached the Polavaram Project and the backwaters inundated the agency villages in Devipatnam and Polavaram mandals.

Many islet villages have been marooned fully or in part. Many families refused to leave their houses when shelter was offered to them in rehabilitation centres. “We are used to the floods and would remain in our houses,” they argued with officials.

Additional forces like 8 NDRF and 10 SDRF teams reached these districts to take up rescue and relief works.

Some 20 mandals in Konaseema, eight mandals in East Godavari, five mandals in ASR, four mandals in West Godavari, three in Eluru and two mandals in Kakinada may be affected by the floods. The disaster management department has alerted all the collectors to take necessary steps for relief work.

An ex-serviceman, Palli Venkateswara Rao (53) of B Doddavaram village of Mamidikuduru mandal in Konaseema district, is missing. He worked as security guard at GAIL office at Pasarlapudi village. He phoned his family members on Thursday night saying he would reach home by crossing across the flood waters.

Later, his phone stopped responding to calls. He did not return to his house on Friday either. His son Kiran lodged a complaint with the Mamidikuduru police station.

Police said a search was on for the missing person.

People living in huts and tiled houses have been evacuated from their houses to the rehabilitation centres. But, those who are having two-storied buildings or houses on hills, have refused to leave their homes. Kothapeta MLA Chirla Jaggireddy visited Baduguvani Lanka village of Alamuru mandal along with officials by boat and urged the people to leave their homes. But, they refused.

According to sources, police teams evacuated the people of 36 villages in Konaseema district with the support of revenue officials.

Eluru collector Venkatesh said nine villages were cut off in the district and 16 river bunds were weakened.