Mallikarjun Kharge set to be next Congress chief as Gandhi loyalists, G23 back him; Tharoor his challenger 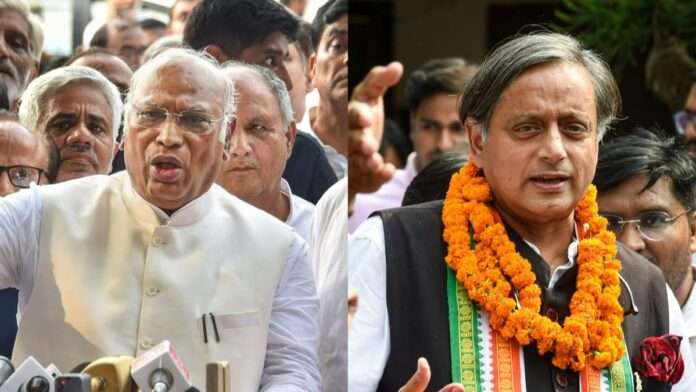 New Delhi: Eighty-year-old Mallikarjun Kharge, the sitting leader of opposition in Rajya Sabha, is all set to become the next Congress president with the Gandhi family loyalists as well as leaders of the pro-reform G-23 group throwing their weight behind him after he filed his nomination for the election to the top post on Friday, September  30, a report in The Tribune, Chandigarh, says.

As soon as Kharge, a last-minute entrant after Rajasthan Chief Minister Ashok Gehlot pulled out of the race, announced his decision to run, another contender for the Congress chief’s post Digvijaya Singh withdrew in the veteran’s favour and calls surfaced seeking consensus behind the former nine-term Karnataka MLA and a three-term MP.

Gehlot, who was one of the formidable proposers for Kharge today, said perhaps Shashi Tharoor, who also filed his papers for the contest today, “would also withdraw from the contest making it a consensus election”.

Tharoor, 66, however, said he was determined to run and was not “daunted by his rival”.

“This election is about the youth and the future of India. I have a vision to decentralise the Congress, reimagine AICC headquarters, increase focus on youth and women. My nomination papers with 60 signatures represent the voices of Congress leaders from Kashmir to Kerala, Punjab to Nagaland, and across,” Tharoor said planning to visit all states and distribute his “manifesto” to all 9,100 Pradesh Congress Committee delegates, who are voters in the election.

Kharge for his part had a strong list of proposers who signalled complete backing of incumbent Congress president Sonia Gandhi to the senior leader.

The list of proposers backing the veteran leader revealed that Kharge versus Tharoor would be a no contest in case matters come to an election, scheduled for October 17.

Speaking for G23, Tewari surprisingly called for consensus for the top post on Friday morning and quoted late president Pranab Mukherjee on the matter.

Mukherjee had said, “Certain offices should not be sought, rather they should be offered. Congress presidency is one such office.”

Tewari said it was time to close ranks and support Mallikarjun Kharge.

Earlier, Sonia Gandhi had assured Tharoor that there would be no official candidate but Kharge’s emergence and his list of proposers narrated a different story.

Kharge, once elected, will be the first non-Gandhi president in 25 years.

He was succeeded by Sonia Gandhi who assumed the mantle in 1998 and remains the longest serving to date except briefly between 2017 and 2019 when her son Rahul Gandhi came in. Rahul resigned in August 2019 taking responsibility for the party’s Lok Sabha poll loss that year. Sonia has since remained the interim chief.

Kharge’s selection is strategic — he is a Gandhi family loyalist, a low-profile leader who won’t rock any boat, a veteran Karnataka politician whose elevation may help the party in the 2023 state election.

Kharge is likely to quit as Leader of Opposition in Rajya Sabha honouring the party’s ‘one person one post’ rule. Former Madhya Pradesh CM Digvijaya Singh could succeed him in the role.

After filing his papers, Kharge recalled his first assembly ticket in 1972 given to him by late Indira Gandhi.

“I have been associated with the Congress since I was a child. I would paste posters propagating the ideology of Mahatma Gandhi, Jawaharlal Nehru, BR Ambedkar,” said an emotional Kharge as the Congress is set out to signal Scheduled Caste empowerment through Kharge’s projection.