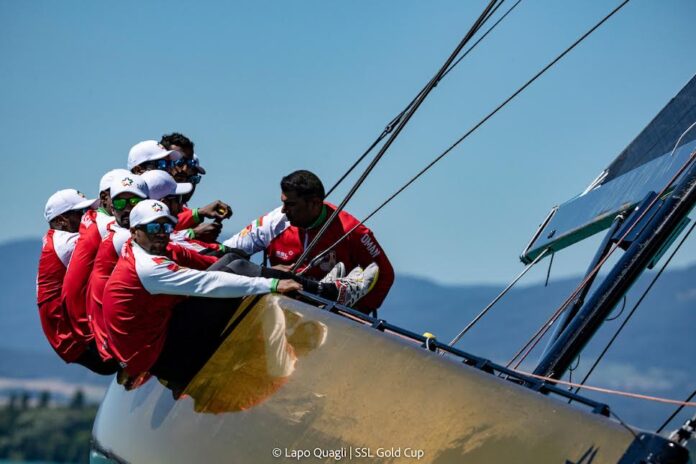 Qualification secured to series finals in Bahrain. SSL Team Oman produced an aggressive display in the first race of the day, timing their attack to perfection in the final downwind leg and forcing SSL Team Cuba into a costly double-gybe that proved decisive.

After the first two days, SSL Team Oman was at last place in the group with a one-point penalty for late registration but two wins on Golden Day, where the final two races carry double points, saw the ‘Lions of the Sea’ overtake Mexico, Guatemala and Cuba, to top the group and qualify for the SSL Gold Cup 2022 Finals Series in Bahrain in October.

SSL Team Oman produced an aggressive display in the first race of the day, timing their attack to perfection in the final downwind leg and forcing SSL Team Cuba into a costly double-gybe that proved decisive.

Cuba finished second, ahead of Guatemala with Mexico in fourth. The result meant that the final race of the weekend turned into a winner-takes-all clash for the qualification places.

Oman made it two wins from two in a dramatic finish. In second place behind Cuba at halfway, which would have seen both teams qualify, the competitive spirit took over and both teams took turns in attacking each other to try and seize victory.

The Omani team went for gold on the final approach, forcing Cuba to tack out wide and surrender the lead with SSL Guatemala lurking dangerously behind.

While the Cuban team protested, the Guatemalans closed in, and briefly it looked like their dream of qualification was over but before it was too late, SSL Team Cuba found their composure to deny the Guatemala at the finishing line.

Musab Al Hadi, SSL Team Oman Helmsman, said, “As I said before, the racing hasn’t ended until we get a first, and we get the firsts today. This is a big achievement for my team, well done to the crew because they have done their job very well. Now we’ll get ready to go to Bahrain!”

Oman made it two wins from two in a dramatic finish. In second place behind Cuba at halfway, which would have seen both teams qualify, the competitive spirit took over and both teams took turns in attacking each other to try and seize victory.

Star Sailors League, a World Sailing Special Event, was created by sailors for sailors and is the ultimate challenge between sailing nations.

Held in the Kingdom of Bahrain from October 28 to November 20, 2022, the SSL Gold Cup Finals Series follows a similar format to the FIFA World Cup where groups of four teams face each other and the top two teams advance to the next round.

Forty nations start the competition, including the World’s Top 23 Sailing nations plus 16 teams coming from the Qualifying Series – held between May and July 2022 – and host nation Bahrain, all racing on the exact same boat, the SSL47, a 14-metre performance racing boat.

The Finals Series in October will see an initial 16 teams race in four Groups, with the top two being joined in the next round by high-ranking teams that have already qualified for the Last 16, Final 8 and Quarter Finals.

Operating under Oman Tourism Development Company, Oman Sail is tasked with rekindling the country’s maritime eminence, promote the Sultanate around the world through sailing, contribute to the sustainable prosperity of the nation and provide long-term learning opportunities for the youth.

Since 2008, Oman Sail has built a solid foundation around Sailing, Tourism, Commerce, Health and Environment, all underpinned with competency-based development for its workforce. Committed to offering both men and women equal opportunities to learn, Oman Sail’s programmes focus on nurturing young talent to develop the sailing champions of tomorrow, increasing revenue in the tourism, activity and experiential learning markets and gaining prominent international exposure for the country.

The company has a strong track record in delivering a portfolio of events across the Sultanate to showcase Oman’s natural beauty, tourism potential, the people’s hospitality, and the infrastructure readiness for business opportunities. More information can be found on www.omansail.com

More information can be found on our website: www.omansail.com

Stay up to date: