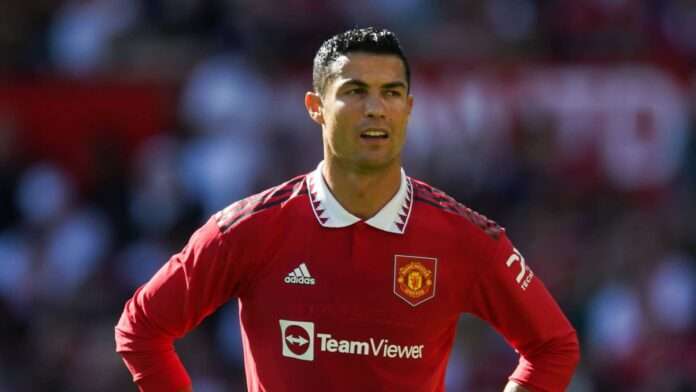 He has now become the first man to score in five World Cups.  He overtakes Pele and Germans Uwe Seeler and Miroslav Klose, who all scored in four World Cups.

Doha: Cristiano Ronaldo became the first player in history to score in five World Cups as Portugal defeated Ghana 3-2 in their Group H opener at the Stadium 974 on Thursday, a report in The Peninsula, says.

The former Manchester United forward scored Portugal’s first goal off a penalty in the 65th minute to make history. At 37 years and 292 days, Ronaldo also became second oldest player to score at the World Cup behind Roger Milla (42 years, 39 days) in 1994 for Cameroon.

Osman Bukari pulled one back for Ghana in 89th minute but coach Fernando Santos’ side held on during nine minutes of injury time to start their campaign on a winning note.

Earlier on Thursday, Uruguay and South Korea shared points after a goalless draw in opening match of the group at Education City Stadium.

Portugal will next meet Uruguay on Monday while Ghana and South Korea will square off the same day.

Ronaldo has become the first man to score at five World Cups on Thursday after opening the scoring in Portugal’s World Cup clash with Ghana.

The 37-year-old Ronaldo set the record when he smashed home a penalty in the 65th minute at the 974 Stadium in Doha to give Portugal the lead in the Group H clash with the Black Stars, from Ghana.

He overtakes Pele and Germans Uwe Seeler and Miroslav Klose, who all scored in four World Cups.

Ronaldo also extended his own world record tally of international goals to 118.

He won the spot-kick himself when he was brought down by a clumsy challenge from Mohammed Salisu.

Manchester United announced this week that Ronaldo will leave with immediate effect after he criticised the club and manager Erik ten Hag in a TV interview, but he has showed no signs of strain from the bitter end to his time at Old Trafford.

The 37-year-old Ronaldo set the record when he smashed home a penalty in the 65th minute at the 974 Stadium in Doha to give Portugal the lead in the Group H clash with the Black Stars,  from  Ghana.

Despite the fact that he may be past his prime, the Portuguese player remains one of football’s most lethal finishers to his day

As of now Ronaldo is without a club after Manchester United cancelled his contract as a result of his explosive interview criticising manager Erik ten Hag, the club’s owners and many of his United teammates.

Ronaldo doesn’t appear to have a new team lined up so his performances at the World Cup might yet convince potential employers to take the plunge on the five-time world player of the year, who may be past his prime, but remains one of soccer’s most lethal finishers to his day.

Speaking before the announcement that he had left United by mutual consent, he was adamant that club matters would not impact his game at the World Cup.

The motivation of winning the World Cup for the first time is likely driving Ronaldo enough in Qatar, but impressing a potential new club would be a nice bonus to go alongside it.

Ghana is the lowest-ranked team at the World Cup — at No 61 — and is the big underdog in a group containing Uruguay and South Korea as well.

Still, Saudi Arabia showed that anything is possible at this tournament by beating Lionel Messi’s Argentina against all odds on Tuesday.

The Blacks Stars also have some players in form, such as Thomas Partey — the midfield anchorman of Premier League leader Arsenal — and Mohammed Kudus, who has been scoring freely for Ajax in the Champions League this season.

Portugal had started as the favourite, with coach Fernando Santos who has had 8 years of experience as coach and of leading the national team to the European Championship title in 2016.