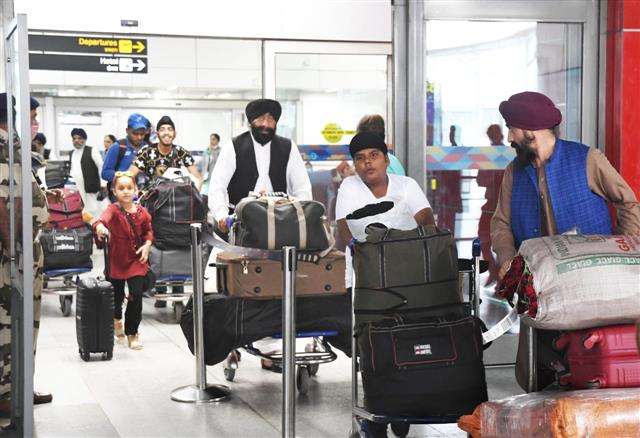 21 Afghan Sikhs arrived in Delhi on Thursday, July 14, as evacuation of minorities from Afghanistan to India continues

New Delhi :The past year was a nightmare for 27-year-old Rajinder Singh, an Afghan Sikh, who lost his unborn child due to lack of medical facilities in Taliban-controlled Kabul and lived in constant fear as minorities came under attack,  a report in The Tribune, Chandigarh, says.

Rajinder and his wife were among 21 Afghan Sikhs who arrived in Delhi on Thursday, July 14, as evacuation of minorities from the country to India continues.

His wife, who was seven months’ pregnant, lost her child in September 2021 due to lack of medical facilities.

“The city of Kabul turned into a graveyard and all the hospitals were inaccessible at the time. My wife was seven-months pregnant when we lost the child. There was no doctor, no possible way to get check-ups done,” Rajinder told PTI.

Most of the people from the minority Hindu and Sikh communities in the Afghanistan capital city had taken shelter inside a gurdwara after the Taliban took control of the country, as American troops stationed there since a little over 10 years, exited from the country .

“We did not get to see anything beyond those four walls of the gurdwara for two months. No one is safe in Afghanistan. Our lives were under constant threat,” Rajinder said.

“My residence is located just beside the gurdwara. We could hear gunshots from our home when the gurdwara was attacked. There was no one as such whom we could approach for help. The Indian government extended support to us and hence, we managed to escape,” Rajinder said.

Most of the people from the minority Hindu and Sikh communities in the Afghanistan capital city had taken shelter inside a gurdwara after the Taliban took control of the country.

The 21 Afghan Sikhs who were flown in from Kabul on Thursday with assistance from the Shiromani Gurdwara Parbandhak Committee, Indian World Forum and the central government included three children and an infant, officials said.

Indian World Forum President Puneet Singh Chandhok told PTI:”We at the Indian World Forum are extending all possible help and support from our end. All arrangements have been done for their convenience. We have been trying our best for their safe and secure travel from Afghanistan to India”.

He added around 130 Afghan Hindus and Sikhs are still in Afghanistan and about 60 visa applications are pending with the Indian government.