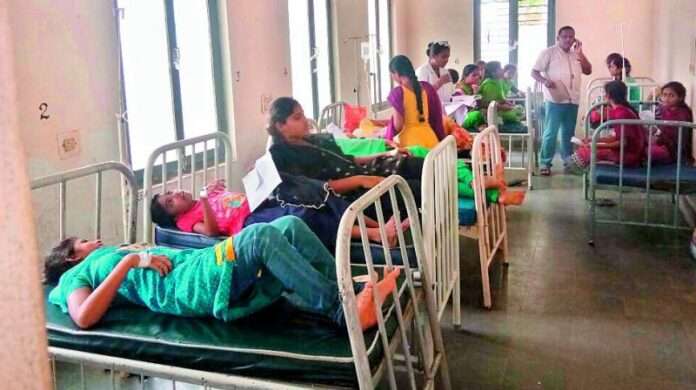 On average, there was at least one case of food poisoning among students in different districts every week this year, an issue which came to the fore after students at IIIT Basar launched an agitation last month.

HYDERABAD: This year, July in particular, has not been good for students in government-run social welfare schools /  hostels on account of a large number of food poisoning cases, a report in the Deccan Chronicle, says

On average, there was at least one case of food poisoning among students in different districts every week this year, an issue which came to the fore after students at IIIT Basar launched an agitation last month.

On Monday, at the KGBV School at Bela, a mandal headquarters in the Adilabad district, where 22 girl students developed food poisoning symptoms. So far this year, some 700 students are feared to have fallen victims to poor quality of food.

The common problems that have been listed just this year with respect to food quality include presence of earthworms, cockroaches, and other creepy-crawlies in food items, while spoilt rice and vegetables used for cooking are more or less staple among most of the government-run welfare schools, colleges, and hostels.

While there was no death as a direct result of food poisoning, a student, 18-year-old Shabotu Sanjay Kiran from IIIT Basar, died while undergoing treatment at a hospital in Warangal on July 26.

Inquiries by Deccan Chronicle into the state of affairs at IIIT Basar which was visited by education minister Sabitha Indra Reddy who promised the students that things would change for the better, revealed that nothing really changed much. Students told this newspaper that many of them did not eat properly as the sambar or other curries were far too spicy.

“All it takes to keep children healthy is to ensure the kitchen staff are trained in hygiene, and the contractors use quality vegetables, and rice. This is not difficult at all,” an official from Akshaya Patra Foundation, which prepares tens of thousands of meals for school children in Telangana every day, said.

Share
Facebook
Twitter
WhatsApp
Previous articleJEE centers set up in Washington, Moscow and Ottawa
Next articlePak woman marries her servant; they address each other as ‘Salman Khan, Katrina Kaif’