Lonely kitty finds comfort, solace in a statue’s ‘warm embrace’; netizens can’t get enough of it 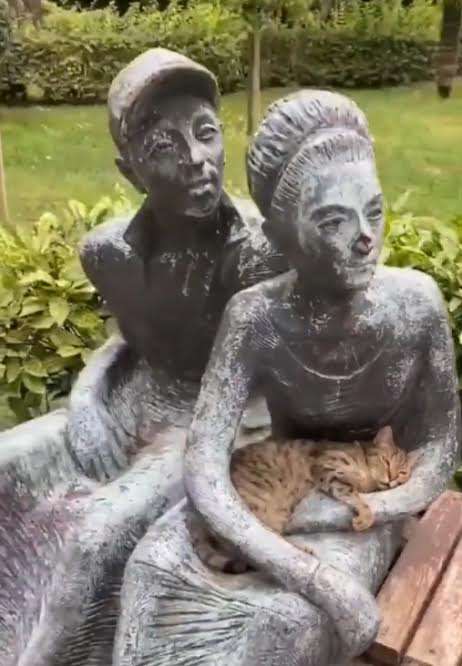 A video is going viral on social media, which shows a cute kitty in a cosy cuddle in the arms of a statue. Shared by Buitengebieden on Twitter, the heart-melting video has garnered 6.6 million views so far, a report in The Tribune, Chandigarh, says.

While the video reminds viewers of the power of a hug, some netizens feel sad that the cat doesn’t have someone to give her a real hug.

In the video, there are two figurines in a garden and the cat fits itself into the arms of one of the statues. It can be seen finding comfort in the hug, even if it is by a statue. Looks like the cat desperately needed someone’s embrace.

While most users expressed unabashed love for the cat, some felt concerned too.

A user wrote, “Safest place…lap.” Another one lauded the cat, “Kitties are so darn agile that they can get comfortable almost anywhere ….even on stone that isn’t even flat! This is an adorable picture!” A third one said, “Any lap in a storm.” There are comments such as, “Priceless”, “Beautiful, heart-warming”. A comment reads, “The most wholesome video of the year award goes to..!”

But there were also comments expressing worry for the cat. A user wrote, “Aww…that’s sweet. But also a bit sad…doesn’t the cat have someone real that hugs her?” Another one commented, “Does that kitty have a home?”

Many users also shared other videos and pictures of cats and dogs depicting their love for animals.