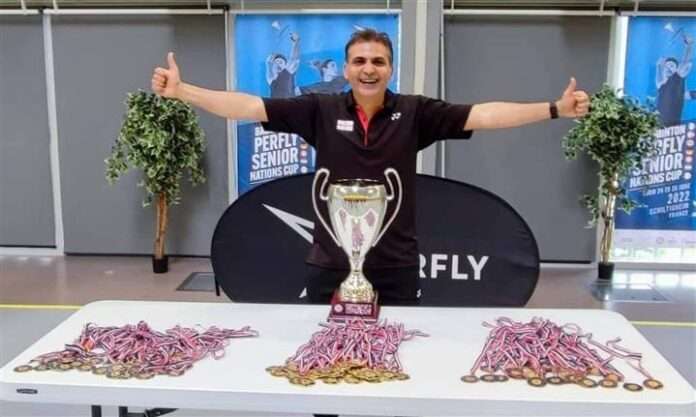 Jalandhar: City-based NRI and former Punjab badminton player Rohan Kapoor has once again made Jalandhar proud as he bagged the gold medal in the Perfly Nations Cup 2022, which was held at Schiltigheim (Strasbourg), France recently, a report in The Tribune, Chandigarh, says.

The tournament was played between the European Countries and Rohan represented England in the tournament.

From Adda Hoshiarpur Chowk, Rohan has been liiving in the UK for around three decades now. Interestingly, he comes from a family of badminton players.

His father Raj Pal Kapoor said: “It was a proud moment for the family seeing Rohan competing in France. He had earlier also won gold in the Open Badminton Championship held in England.”

He said Rohan’s team managed to beat Ireland, Switzerland, France, Holland, Germany and Denmark and took the trophy home. “On call, Rohan told me every single detail about the cup and how wonderful his experience was. He told me that England’s triumph in the Nation’s Cup was the result of a team effort,” he added.

He further said his son was now gearing up for the European Championship, which would be held from August 7 to 13 in Ljubljana, Slovenia.

Raj Pal Kapoor and sister Heena Kapoor were also associated with the sport. Both had represented India in various national-level championships.

Rohan Kapoor’s bbrother Rohit, has represented Punjab in the national badminton championships and had won a silver medal in the tournament organised by the School Games Federation of India in Dhanbad.

He said his son completed his studies in 2000 from DAV College here, and represented Punjab in the national badminton championships for over 10 years. He also served the erstwhile Punjab State Electricity Board for three years between 1998 and 2000 and won multiple badminton medals for the department.