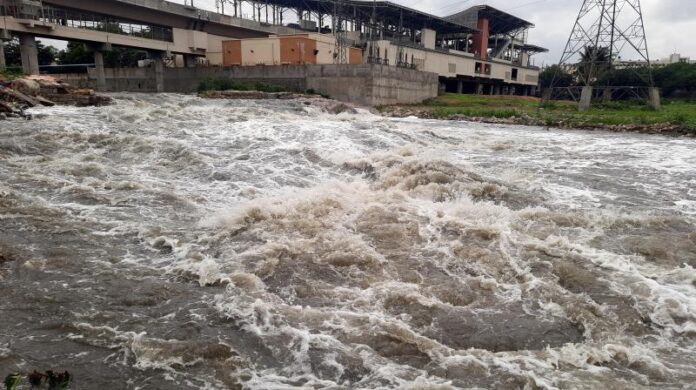 All projects in the Godavari basin were full, and gates were being opened to release water downstream

HYDERABAD: Rains continued to lash several parts of the state on Sunday, July 24, especially in northern Telangana where Nirmal district received 4.52 cm of rainfall on Sunday. There were no reports of loss of life, a report  in the Deccan Chronicle, says.

All projects in the Godavari basin were full, and gates were being opened to release water downstream.

Officials opened 18 gates of Sriramsagar project after it became full and continued to receive inflows of 82,740 cusecs on Sunday. The water level was 1,087 ft against the full reservoir level (FRL) of 1,091 ft.

The Yellampalli project received even higher inflows of 2.2 lakh cusecs, forcing officials to release 2.48 lakh cusecs downstream. Water stood at 478 ft in the project against the FRL of 485 ft.

In the Krishna basin, the Srisailam project received huge inflows of 1.21 lakh cusecs forcing officials to lift gates to release 1.11 lakh cusecs on Sunday after the project attained 882 ft against the FRL of 885 ft. The outflows from the Jurala project contributed to the huge inflows to Srisailam.

Incessant rains over the past week have inundated residential localities located near lakes, prompting residents to seek shelter elsewhere. Osmansagar near Jalpally was among the worst-hit areas as residents took to social media to share their plight.

The release of Srisailam water contributed to inflows to the Nagarjunasagar project which received 58,417 cusecs. Nagarjunasagar attained water level of 542 ft against the FRL of 5,90 ft. The inflows also resulted in medium irrigation projects across Telangana brimming with water.

Incessant rains over the past week have inundated residential localities located near lakes, prompting residents to seek shelter elsewhere. Osmansagar near Jalpally was among the worst-hit areas as residents took to social media to share their plight.

Drain projects and other works, intended to stop the inundation this year, were left midway, leading to inundation for a third consecutive year, residents said.

“Earlier, it (inundation) used to take place in September or October, but this time, the problem surfaced in early monsoon. Delayed works have once again prompted people to lock their houses and leave.

A similar problem hindered residents of the Ayyappa Colony in Nagole, which borders Sai Nagar Lake. Residents moved out en masse, as the sudden overflow of water caused panic.