This Kitten has an Identity Crisis; She thinks she is a dog 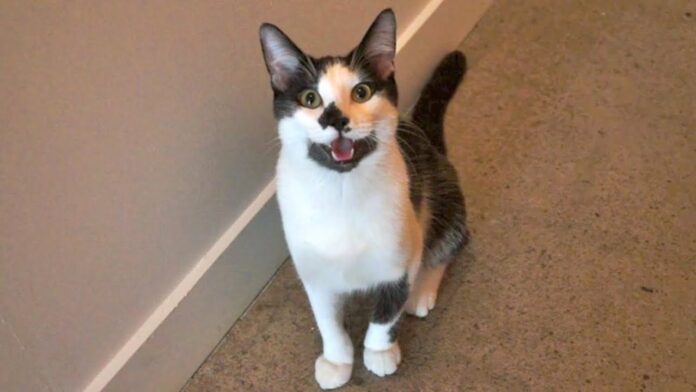 Who would have thought that this once struggling kitty would actually grow and become a very courageous and different canine with very odd behaviour.

A certain lonely kitty who was only a few weeks old was abandoned right on the South Bay area of California state,  left to survive on  its own, a report in The Tribune, Chandigarh, says.

Fortunately, three sisters found the abandoned kitty it and took him in. The kitty ended up forming a very strong bond in their home with one of the sisters’ Siberian Huskies, a husky called Lilo.

Who would have thought that this once struggling kitty would actually grow and become a very courageous and different canine with very odd behaviour.

While the weather in California might seem to be always warm and sunny, winter and spring time can still be quite chilly – especially up north. Reaching temperatures of around the 40s at night in San Jose, California, a young little kitty was struggling to survive around April of 2015 all on her own.

Thoa and her sisters Thi and Tram had stumbled upon the lost kitten, and wasted no time in taking her into their home. But the thing about taking in stray animals, especially kittens, is that sometimes they aren’t necessarily abandoned even if you find them all alone.

Thoa explained to ABC News that it was clear to them all that this kitten was “malnourished, lethargic, and dying”. It was apparent to the expert animal rescuer that this kitty was in need for critical care, took her in and named the cute, cuddly kitten, Rosie.

However, no matter what Thoa would do, Rosie didn’t seem to respond to any form of aid, and she realised that maybe her pet Siberian Husky Lilo would make some  sort of a difference.

And it worked like magic. Suddenly everything changed for Rosie. “Lilo never left Rosie’s side for hours,” she explained to ABC News. Together, the two instantly shared a special bond. “She cuddled her and comforted her until she was better and ready to finally drink from a bottle,” Thoa revealed to ABC News.

Thoa and her sisters Thi and Tram had stumbled upon the lost kitten, and wasted no time in taking her into their home. But the thing about taking in stray animals, especially kittens, is that sometimes they aren’t necessarily abandoned even if you find them all alone.

Thoa said that Lilo was never and could never be a mother – at least not naturally. But when it comes down to nurturing like a mother, it seems like her maternal instincts are incredibly strong!

Nobody would’ve thought that a Siberian Husky would be so compatible with a three-week old kitten. The two connected like mother and daughter in no time, and became inseparable.

However, Lilo didn’t just have Rosie as a new family member. Long before Rosie came along, Lilo was part of a pack of three adorable huskies, the others named Infinity and Miko.

Infinity, Miko and the lovely, motherly Lilo were a pack and did everything together. So when Rosie was added in to the bunch, they instantly bonded and became buddies and live happily together.