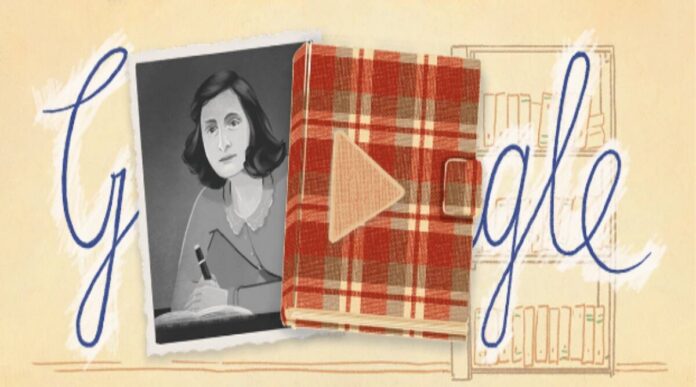 Over time, Anne Frank’s diary has become one of the world’s best-selling books, and continues to serve as the inspiration for several plays and films.

On Saturday, June 25, Google commemorated the 75th anniversary of the publication of The Diary of a Young Girl by Anne Frank, with a Google doodle video depicting moments from her life in the book.

It also honoured what would have been the teenage diarist and Jewish Holocaust victim’s 93rd birthday earlier this month, on June 12.

Anne kept a diary she had received as a birthday present, and chronicled her family’s life in hiding.  The diary was actually an autograph book bound with red-and-white checkered cloth and with a small lock on the front.

The young girl decided she would use it as a diary, and had named it Kitty. She began writing in it almost immediately. In her entry dated 20 June 1942, she lists many of the restrictions placed upon the lives of the Dutch Jewish population.

The diary is also full of her inner life as a teenager, and she vividly describes all the routine little battles that adolescents have to go through. It has become an important document in understanding what life under the Nazi Party was like.

Anne’s diary was translated from its original Dutch and first published in English in 1952 as The Diary of a Young Girl. Since then, it has been translated into more than 70 languages.

Over time, the diary has become one of the world’s best-selling books, and continues to serve as the inspiration for several plays and films.

Google Doodle art director Thoka Maer created the doodles. The German illustrator has talked about her sense of responsibility to preserve the memory of the Holocaust as a major factor in the illustration process.

Anne’s diary was translated from its original Dutch and first published in English in 1952 as The Diary of a Young Girl. Since then, it has been translated into more than 70 languages.

Anne Frank – originally her full name was  Annelies Marie Frank – was a German-Dutch diarist of Jewish heritage. One of the most-discussed Jewish victims of the Holocaust, she gained fame posthumously with the 1947 publication of The Diary of a Young Girl

Born on June 12, 1929, to Otto and Edith Frank in Frankfurt, Germany,. Her family moved to Amsterdam in Netherlands in 1934, after the Nazi Party headed by Adolf Hitler gained power in Germany.

As persecution of the Jews increased in July 1942, the Franks went into hiding in concealed rooms behind a bookcase (a place referred to as the ‘Annex’ in Anne’s diary) in the building where Otto worked.

Until the family’s arrest by the Gestapo (Nazi secret police) on August 4, 1944, Otto, the only surviving member of his family in the Holocaust, returned to Amsterdam to find that Anne’s diary had been saved by his secretary, Miep Gies. He decided to fulfill Anne’s greatest wish to become a writer and publish her diary in 1947.

In early 1945, a typhus epidemic spread through the camp, killing 17,000 prisoners. Evidence suggests that she, too, died from the epidemic in a concentration camp in Bergen-Belsen in Germany.

Share
Facebook
Twitter
WhatsApp
Previous articleBahrain: VFS Global is Bahrain Tourism’s India representative
Next articleThis Kitten has an Identity Crisis; She thinks she is a dog