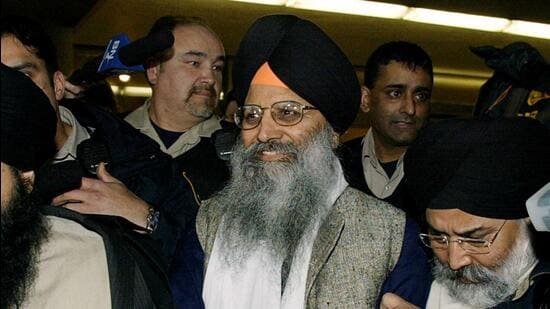 Tanner Fox, 21, and Jose Lopez, 23, are both charged with first-degree murder

Chandigarh: Two men have been charged with Canada-based Sikh leader and businessman Ripudaman Singh Malik’s murder. Malik, a Sikh businessman was acquitted in connection with the 1985 Air India bombing that killed 329 people.

Tanner Fox, 21, and Jose Lopez, 23, are both charged with first-degree murder.

Fox and Lopez were arrested from their homes on Thursday, July 28, according to the  Integrated Homicide Investigation Team. The two men’s lawyers could not immediately be contacted for comment.

“This case was complex with its own unique challenges,” Supt Mandeep Mooker said.

Malik, who was acquitted in the 1985 Air India Kanishka bombing case, was shot dead on July 14. In his seventies, Malik was the head of Khalsa schools across Canada. Investigators believe it was a targeted crime.

Police found Malik with gunshot wounds before he died in Surrey, British Columbia, on July 14.

Police said at the time that they had not established a motive for Malik’s killing nor found evidence to suggest whether the killing was connected to the airline attack, though the shooting appeared to be targeted.

Malik and co-accused Ajaib Singh Bagri, a sawmill worker in British Columbia, were acquitted in 2005 of charges related to the attack on Air India Flight 182, which exploded over the Atlantic Ocean in 1985 in one of history’s deadliest bombings of a commercial airliner.

They were also acquitted of charges related to the killing of two baggage handlers who died when a suitcase bomb, alleged by police as designed to destroy another Air India jet over the Pacific Ocean, exploded in Japan’s Narita airport.

Police said at the time that they had not established a motive for Malik’s killing nor found evidence to suggest whether the killing was connected to the airline attack, though the shooting appeared to be targeted.

Canadian police were criticised for their investigation of the attack. The government apologised in 2010 to families of the victims, saying authorities failed to act on information that could have prevented the attack or catch those responsible.

Canadian and Indian police have long alleged the Air India bombing was conducted by Sikh extremists living in Canada as revenge against India for the 1984 assault on the Golden Temple in Amritsar.

The raid on the Golden Temple, which the government said was aimed at flushing out Sikh separatists, was a bloody episode that angered Sikhs around the world; they accused the Indian army of desecration.