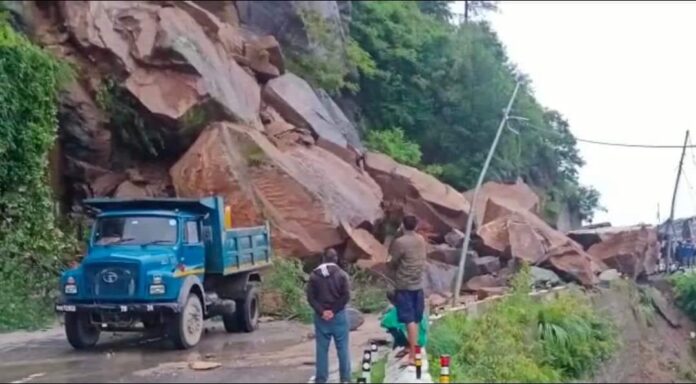 The movement of vehicles either from Manali to Lahaul or vice versa has been completely disrupted as well.

Mandi: Traffic on the Manali-Leh highway was blocked and at a standstill at Nehru Kund near Manali in Kullu district on Tuesday night due to a massive landslide in the area.

The movement of vehicles either from Manali to Lahaul or vice versa has been completely disrupted as well.

The traffic has been diverted through Palchan till boulders are cleared from the road.

Soon after receiving information from the Kullu district administration, the Border Roads Organisation (BRO), which maintains the highway, swung into action with men and machinery into service to clear the blockade.

The traffic was diverted via Burua-Shanag link road, Manali station house officer (SHO) Sandeep Pathania said. However, a massive traffic jam has been reported on the alternative route.

The Shimla-Kinnaur highway (NH05) is also blocked for traffic after a massive landslide at Chaura. There has been long queues of vehicles on both sides.

Meanwhile, the Chandigarh-Manali highway that was blocked due to a landslide at Aut near Pandoh has been reopened.

The Aut-Banjar-Sainj highway was also blocked due to a landslide at Chhait on Wednesday night.It took two hours to restore traffic.No loss of life or damage to property was reported.

The MeT department has forecast rains for next one week. A yellow weather warning for heavy rains, thunderstorm and lightning has been issued. People have been warned to avoid unnecessary traveling due to the threat of landslides.