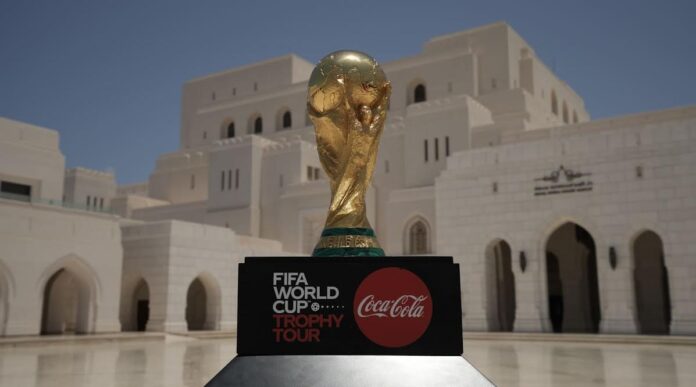 The FIFA World Cup Original Trophy was unveiled in Muscat today as the FIFA World Cup Trophy Tour by Coca-Cola continues its journey across the Middle East, a press release issued on Friday said.

Mohamed Akeel said: “We are delighted to bring the energy and excitement of the world’s most loved football tournament to Oman. For the first time ever, the FIFA World Cup Trophy Tour by Coca-Cola is beginning and concluding in the Middle East. At Coca-Cola, believing is magic and we are proud to bring fans this once-in-a-lifetime experience. I would also like to thank FIFA and the Oman Football Association for their partnership.”

Oman’s passion for football is well-known, and Muscat’s stunning Royal Opera House was a stunning location to continue the global Tour. Coca-Cola invited fans to a once-in-a-lifetime opportunity to see the most iconic symbol in football and experience the Real Magic of the 2022 FIFA World Cup.

Al Habsi said: “It is an honor for us and our country that the FIFA World Cup Trophy Tour by Coca-Cola is in Oman as part of its global journey. It gives youth a chance to be closer to what football is all about – believing that anything is possible. It will also encourage more players to get into sports and make their country proud. Finally, seeing the original FIFA World Cup Trophy is also a huge motivation for us as it gives us hope that we, too will win this Trophy some day and not just host it.”

The FIFA World CupTM Trophy Tour by Coca-Cola will visit 51 countries and territories, bringing Coca-Cola and FIFA one step closer to visiting all 211 Football Nations by 2030. For the first time ever, the tour will visit all 32 FIFA World CupTM qualifying countries, inspiring fans across the world through exclusive consumer experiences.

Silva said: “I know first-hand how lifting the FIFA World Cup Trophy can excite millions of fans across the world.  It is an honor to be here in Oman and I’ve seen first-hand the passion for football across the Middle East. With 51 stops across the world, I’ve no doubt the Tour by Coca-Cola will inspire and engage an unprecedented number of fans and future rising stars from this region.”

The Tour will make several stops across the Middle East, visiting Bahrain, Kuwait and Lebanon. The Tour began in the UAE and will visit Saudi Arabia as the penultimate destination, before reaching the host country Qatar.