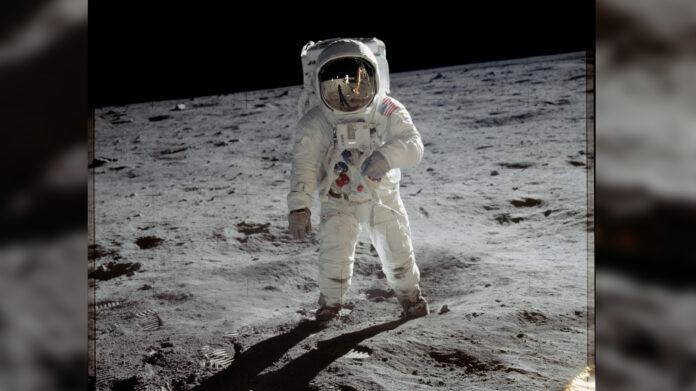 And Apollo 11 astronaut, Commander Neil Armstrong, uttered those  epoch-making words to Mission Control on earth at Houston, USA, heard around the world: “A single step for man; a giant leap  for mankind”.

Ordinary days slip away swiftly and quietly, lost forever in the abyss of Time. But some days don’t die. They become extraordinary milestones in Time across the universe, a tribute to Man’s intrepid and unending odyssey across mysteries, discoveries, frontiers – always seeking something more.

One such day just came by on July 20. It commemorates International Moon Day, the historic anniversary of July 20, 1969, when humans first set foot on the lunar surface, the single greatest technological achievement of all time. And Apollo 11 astronaut, Commander Neil Armstrong, uttered those  epoch-making words to Mission Control on earth at Houston, USA, heard around the world: “A single step for man; a giant leap  for mankind”.

Six hours after landing, Commander Neil Armstrong stepped onto the lunar surface on 21 July at 2:56 AM. The moment was broadcast live.

Lunar module pilot Buzz Aldrin followed Armstrong 19 minutes later and the duo spent about two and a quarter hours outside the spacecraft. They collected 21.5 kg of lunar material to bring back to Earth.

Another person involved in the important mission was Command module pilot Michael Collins, who had flown the Command Module Columbia alone in lunar orbit while he waited for the other two.

In Lucknow, too, the American Centre and Library situated just behind the UP Press Club in the China Bazar locality, held a grand exposition, with free entry for all visitors.

Armstrong and Aldrin had spent around 21 hours on the lunar surface at a site called Tranquility Base before they lifted off to rejoin Collins in the command module Columbia. The trio then came back to Earth and landed in the Pacific Ocean on 24 July after more than eight days in space.

The US spared no effort to highlight this historic achievement to the fullest. At US missions, consulates, embassies and American centres or libraries around the world, Lunar rock sample were put on display for public viewing.

In Lucknow, too, the American Centre and Library situated just behind the UP Press Club in the China Bazar locality, held a grand exposition, with free entry for all visitors.

As a grade 10 student, I went along with a couple of my friends to be a part of history in the making. It was a breath-taking and surreal moment   indeed, to say the least.

When did the UN first recognise it? The General Assembly had officially declared International Moon Day, a United Nations-designated day to be marked every year on 20 July, in its resolution 76/76 on ‘International cooperation in the peaceful uses of outer space’ in 2021.