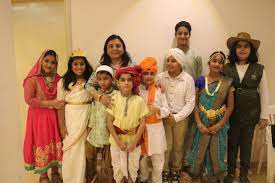 Rakesh Kumar Jha, President of ISC Salalah, extended thanks to everyone who attended the event, especially those who worked hard to make the event successful.

“My special thanks go to all the performers who captivated the audience with performances and well depicted the rich cultures of India and Oman,” he said.

Rupal Pardeshi and Rajesh Pardeshi did the concept and script of the programme.

“Our programme was based on themes like, ‘Celebrating unsung heroes’ and ‘Vishwa Guru Bharat’.  They displayed an immaculate, flawless and proficient performance,” said Rajesh.

The programme was well-received by the audience. There were flow emotions and roar of clapping on every performance

Swami Vivekananda’s concept of ‘Vishwa Guru Bharat’ was well explained during the programme.

Those who played the roles of different icons during the event included:

The programme was well-received by the audience. There were flow emotions and roar of clapping on every performance.