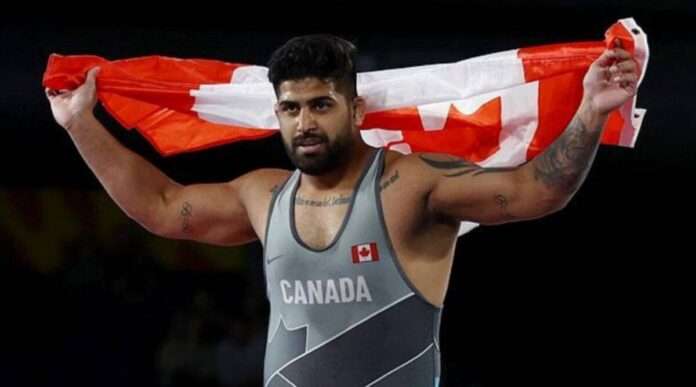 His bout was seen by his father, Balbir Dhesi and his wife Gurbax Kaur, along with their daughter Gulshan Kaur

Amarveer Dhesi (26) won the gold medal in the men’s 125 kg category after a win by fall (9-2) against Pakistan’s Zaman Anwar. His bout was seen by his father, Balbir Dhesi and his wife Gurbax Kaur, along with their daughter Gulshan Kaur. All of them were cheering for Canada’s latest medalist in the Commonwealth Games, reported Indian Express.

“Sade ghar de living room ch mera tan sirf ek Gurj paya hai, baki sare Amarveer te Paramveer de hun (Our living room has only one mace won by me, rest have been won by sons, Amarveer and Paramveer). And with Amarveer winning the gold medal in the Commonwealth Games, it will become the pride of the trophy cabinet. This is a medal for Canada as well for India as that’s where I started wrestling and both the kids have wrestling in their genes,” 72-year-old Balbir Dhesi told The Indian Express.

Balbir Dhesi, who won the national Greco Roman title in Mangalore before shifting to Canada in 1979, is from Sanghwal village in Jalandhar district, Punjab. Apart from competing in national competitions, he was also a well-known name in dangals and won the Rustam e Hind title, apart from winning more than 50 dangals in India. “I loved wrestling in the village dangals since my childhood and later chose to compete in freestyle as well Greco Roman categories. I fought two-time Asian Games gold medallist Kartar Singh once in the nationals and also competed against Budh Singh. But the real satisfaction for me was winning in front of the huge crowds in the village dangals. When I shifted to Canada, I did take my one silverware mace and both Amarveer and Paramveer would fight to carry it and walk in the hall like they had won the title themselves,” Balbir Dhesi told Indian Express.

Even though he shifted to Canada, his love for wrestling saw him competing in local wrestling melas [fairs] known as Chiinj in the Punjabi community. “Since there were a lot of Punjabis here, I formed the Khalsa Wrestling Club in a neighborhood park. Most of us would train and also train the kids in the park and it was years later that we got a facility on rent to train. At that time, I worked in a sawmill 8 km far from our home for more than 22 years and would earn about 2000 dollars per month. I would take my sons for training in the morning before work and in the evening after work. Amarveer was very good in dhak and dhobi pachad moves and we worked on these moves a lot,” said Balbir.

While Paramveer represented Canada in the 2010 Youth Olympics in Singapore, Amarveer Dhesi initially competed in both freestyle as well as Greco Roman, and would become the Surrey and national champion in both junior categories. In 2013, he got a full-time scholarship to Oregon State University and would become the Pac-12 champion before finishing fifth in the NCAA Championships, a first for an Indo-Canadian wrestler. After his silver medal in the world junior wrestling championships in Zagreb in 2014, which was later converted to gold as the other finalist tested positive, Amarveer Dhesi suffered a knee injury, but would bounce back to finish as runner-up in the Canadian Olympic team trials in 2015.

Amarveer Dhesi became the All American champion thrice and did his majors in sociology from Oregon State University. In 2017, he would earn a full scholarship to a Division One NCAA team, and finish third and second in NCAA Championships in 2018 and 2019. He trained at the Ohio Regional Training Centre, home to some of the best wrestlers in the USA.

In 2019, Amarveer Dhesi won his spot in the Canadian team for the 2020 Pan American Olympic Qualification tournament and reached the final, sealing a spot in the 125 kg category for the Tokyo Olympics.