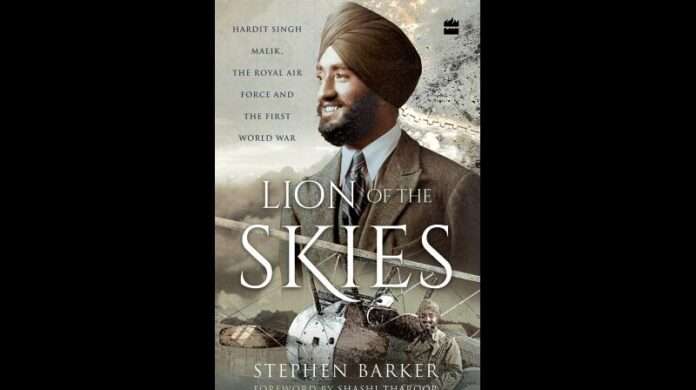 This new type of aerial combat was largely dominated by upper class Europeans. Working class and coloured men almost never made it to the cockpit. This was a rule where one surprising exception was a young Sikh from Rawalpindi in undivided India, Hardit Singh Malik.

HYDERABAD: To those fascinated by scenes of ancient biplanes wheeling through the skies, piloted by men in leather helmets, machine guns mounted just behind the propellers, the pioneers of aerial combat were a breed apart, much like today’s astronauts, who are willing to go where no one has gone before.

A book review in the Deccan chronicle by Indranil Banerjie, of British historian Stephen Barker’s “Lion in the sky” profiles the daring exploits of the very first non-White and non-European combat pilot during World War I: A young Sikh, Hardit Singh Malik,from Rawalpindi in undivided  India, and an Oxford graduate.

This new type of combat was largely dominated by upper class Europeans. Working class and coloured men almost never made it to the cockpit. This was a rule where one surprising exception was a young Sikh from Rawalpindi in undivided India, Hardit Singh Malik.

How he managed to make his way to the battlefields of France and penetrate that exclusive fraternity of gentlemen warriors is the subject of a new and fascinating book by British historian Stephen Barker.

The era of the first fighting planes will always remain enthralling. The First World War and the battle-scarred fields of France were the setting.

Malik had arrived in England in 1909 to enrol as a college student. His older brother was already in the country studying engineering. Malik first enrolled in a college in Eastbourne and then went on to Oxford from where he graduated before moving on to London to study law. The First World War had broken out while he was at Oxford and like all young men of that time, Malik too wanted to enlist.

However, his first attempts were thwarted because at that time British rules did not allow “aliens” like himself to be admitted to the armed forces as an officer. At best they could be inducted as mere “other ranks” and would usually be offered demeaning duties as orderlies.

To Malik, who came from an affluent Punjabi family of some standing, this was totally unacceptable. He wanted to fight for Britain but only as an officer and a gentleman.

It was in France, that he was first smitten by the idea of becoming a fighter pilot.

By the end of 1916, official British attitudes to the idea of Indians and other aliens like Hardit Malik becoming commissioned officers had begun to change for various reasons. Support for his induction as an officer into the Royal Flying Corps (RFC) by his Oxford don eased matters for Malik, who was eventually enrolled as an officer and sent to train as a pilot in Aldershot.

From there began an adventure of a lifetime which Malik survived and returned to India where he joined the foreign service and after Independence became India’s first ambassador to France. He lived well past ninety and when he passed away, he still carried with him two bullets fired at him by a German fighter pilot. It was a life well lived and fought.

However, his first attempts were thwarted because at that time British rules did not allow “aliens” like himself to be admitted to the armed forces as an officer. At best they could be inducted as mere “other ranks” and would usually be offered demeaning duties as orderlies.

The author writes: “As a result of the changing political and military landscape, a small number of Indian military pilots did take part in the air war as officers of the RFC and later the RAF.” But these were just a handful, Malik one of them. He was inducted as an Honorary 2nd Lieutenant, which meant he could neither command British personnel nor receive any pay!

But Malik was delighted to have found a place in the RFC as a gentleman cadet. He wrote to his family: “For I do believe that a man is all the better for having been tested in the forge of modern warfare and having been brought face to face with the elemental problems is fitter to live like a man…. we Sikhs have a great fighting tradition and we should not make too much fuss about death.”

Soon Malik found himself flying a Sopwith Camel with the RFC’s 28 Squadron at Dronglandt in the French Flanders.

The aim of this combined sortie with 32 Squadron was to patrol the front lines with the Camels protecting the slow and clumsy R.E.8 planes carrying out the primary role of spotting for the artillery on the ground.