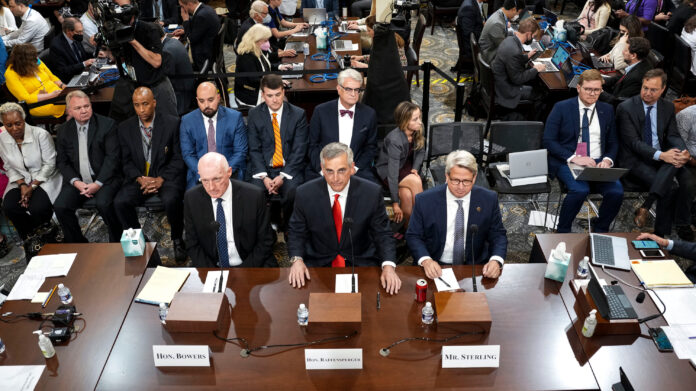 Former US President Donald Trump lunged at a Secret Service agent and grabbed his throat after being told he would not be driven to the US Capitol building on January 6, former White House aide Cassidy Hutchinson said in a dramatic testimony on Tuesday, June 28, a report in the Khaleej Times, says

According to the Los Angeles Times, Cassidy testified before the January 6 investigations committee that “the president had a very strong, very angry response” when the head of Trump’s Secret Service detail, Bobby Engel, refused to drive him to the Capitol after his speech on the Ellipse that day.

“I’m the f-n President. Take me up to the Capitol now,” Trump said, according to Hutchinson’s testimony.

Moving to the front of the limo, Trump then reached for the steering wheel.

“Sir, you need to take your hand off of the steering wheel, we’re going back to the West Wing, we’re not going to the Capitol,” Hutchinson recounted being told by Anthony Ornato, Trump’s chief of operations.

“Mr Trump then used his free hand to lunge toward Engel, and when Mr Ornato recounted the story to me, he motioned to his clavicles,” recounted Hutchinson.

Engel, who was present during the conversation, did not correct or disagree with the Ornato’s story nor has he stated it was untrue s.Trump has since denounced Hutchinson’s story as “fake,” “sick” and “fraudulent” in a post on his own social media site, Truth Social.

Trump was told protesters had weapons

Cassidy Hutchinson, a key aide in Donald Trump’s White House, told the House committee investigating the violent Jan. 6, 2021, insurrection on Tuesday that Trump was informed that people rallying on the mall that morning had weapons but he told officials to “let my people in” and march to the Capitol.

Hutchison, a top aide to Trump chief of staff Mark Meadows, said that she was “scared, and nervous for what could happen” ahead of the riot after conversations with Trump lawyer Rudy Giuliani, Meadows and others.

The 25-year-old, who was a special assistant and aide to former Trump chief of staff Mark Meadows, has already provided a trove of information to congressional investigators and has sat for four interviews behind closed doors. But the committee called the hearing this week to hear her public testimony.

The precise subject of Tuesday’s hearing remained unclear, but the panel’s announcement Monday said it would be “to present recently obtained evidence and receive witness testimony.” A spokesman for the panel declined to elaborate and Hutchinson’s lawyer did not immediately respond to emails seeking comment.