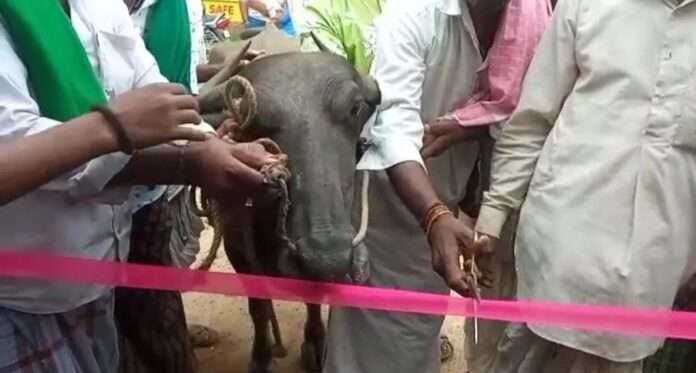 The incident took place in the Balehosur village of Laxmeshwar taluk in Gadag district of the state, where the bus shelter was built 40 years ago, and its roof collapsed a decade ago.

Gadag (Karnataka): Angered by the apathy of authorities and legislators for not caring to build a bus shelter since 40 years, villagers in Karnataka built one themselves and made a buffalo the chief guest, a report in The Tribune, Chandigarh, says.

The videos of the event have gone viral on social media.

The incident took place in the Balehosur village of Laxmeshwar taluk in Gadag district of the state, where the bus shelter was built 40 years ago, and its roof collapsed a decade ago.

The bus shelter was turned into a dumping yard and commuters had to wait for buses close to this spot in the scorching sun and heavy rain.

Lokesh Jalawadagi, the farmer leader, explained that a memorandum had been submitted and pleas were made innumerable times to sitting BJP MLA Ramappa Lamani and MP Shivakumar Udasi.

“The village has a population of 5,000 and every day, hundreds of students travel from the village to surrounding towns,” says Virupaksha Itagi.

The villagers decided to protest against the government’s indifference in a novel way.

They built the roof of the shelter with coconut branches and made a buffalo the chief guest. They also held a ribbon cutting ceremony and decked up the buffalo to register the protest more impactfully.

After the videos and photos went viral on social media, the authorities and legislators gave assurance that they will build a bus shelter soon.