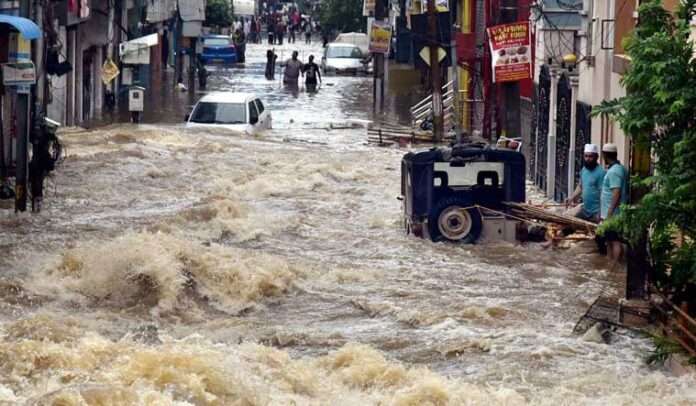 Hyderabad: Incessant rains have caused havoc in several districts in the state killing two persons in a wall collapse incident in Nalgonda district, while a man was washed away in Bhadadri district on Friday, July 8, a report in the Deccan Chronicle, says.

On Friday until just 6 pm, many parts of the state had received up to nearly 70 mm of rain. Khanapur in Khammam district had received the highest rainfall of 69.5 mm, followed by 67 mm in Mahabubabad district, 65 mm in Suryapet, and 63.5 mm in Bhadradri Kothagudem district.

The entire state has received from moderate to very heavy rainfall, which is expected to continue on Saturday, with the Met Department issuing red and orange alerts for multiple districts.

For Hyderabad, light to moderate rain with thunderstorms, and at times intense spells (20-30 mm per hour) have been forecast

In Mahbubnagar district, 25 students were rescued by locals after a bus of a private school was stranded in a waterlogged area.

The private school bus was going to Mahbubnagar from Ramachandrapuram and Suguruguda Thanda. As the bus reached the under railway bridge between the Machanpalli-Koduru locality, the rainwater entered the bus and the vehicle was stranded in rainwater.

The victims in the wall collapse incident were identified as 42-year-old Nadakudi Lakshmi, and her newlywed daughter Kalyani. They were sleeping when a wall of their residence collapsed on them at Padma Nagar in Nalgonda.

For Hyderabad, light to moderate rain with thunderstorms, and at times intense spells (20-30 mm per hour) have been forecast

A man has washed away in the flood water while crossing Kodipunjulavagu at Samithi Singaram village in Manuguru mandal in Bhadradri district. Efforts are on to trace the man, who was identified as Varsha Sankar.

Several reservoirs in the state are in spate, forcing irrigation officials to lift gates of different projects to release water.

At the Kaddam dam, the water level touched 693 feet as against 700 feet of actual full reservoir level (FRL).

In Khammam and Bhadradri-Kothagudem districts, the rain-affected public life. The Godavari river started receiving flood water on Friday and the water level has reached 18 feet at Bhadrachalam. Officials announced an orange alert and alerted the district administration.

The water level at the Jalimudi project on the Wyra River in Madhira mandal has reached the brim.

Taliperu in Charla mandal and Kinnersani projects in Paloncha mandal are at full reservoir level due to the flood water. About 11,912 cusecs of water was being released from Taliperu project by opening 20 gates. The water level of the project touched 74 feet of FRL.