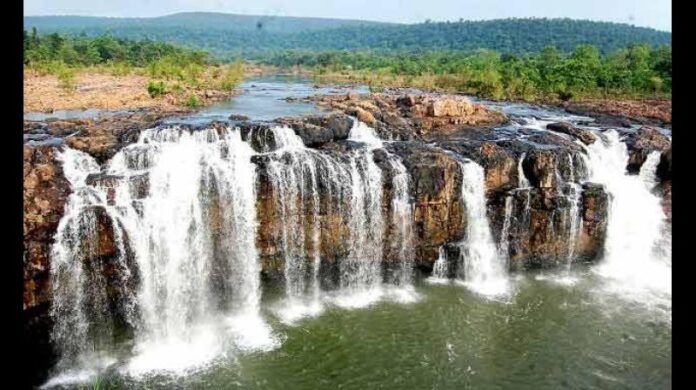 The Bogatha Waterfall, also known as ‘Telangana Niagara’, at Chikupally village of Wazedu mandal of Mulugu district, is a magnificent cascade surrounded by dense forest. A cool climate and lush greenery make it an ideal spot for nature enthusiasts, following the recent rains.

Warangal: Heavy rainfall over the past few days has revived several waterfalls, namely Bogatha, Seven Hills, Muthyala and Bhimunipadam, in Warangal district of Telangana State, with nature lovers flocking to catch a glimpse of the natural spectacle, a report in the Deccan Chronicle, says.

The Bogatha Waterfall, also known as ‘Telangana Niagara’, at Chikupally village of Wazedu mandal of Mulugu district, is a magnificent cascade surrounded by dense forest.

A cool climate and lush greenery make it an ideal spot for nature enthusiasts, following the recent rains. It is visited by thousands of tourists every year, albeit being restricted to visitors at present due to rain risks.

The Seven Hills Waterfall, locally called ‘Edu Bavula’ Waterfall, at Miryalapeta in Bayyaram zone of Gangaram mandal in Mahbubabad district, is a sight to behold, as it is formed by seven wells — as suggested by the name — in a row located on mounds in dense forests.

The area is widely visited by trekkers, as the rough terrain provides a challenging experience.

The Muthyala Dhara Waterfall, located near Veerabadaravaram village of Venkatapuram mandal in Jayashankar Bhupalpally district, is the country’s third-highest waterfall. Flowing from a height of 700 metres, the water is blown by strong winds, giving it an appearance of a long snake. With the water droplets falling like pearls, it is named Muthyala Dhara.

Although the lack of basic facilities at the site makes it unfavourable for trekking, tourists and nature enthusiasts flock to the area, as they can take a 10-kilometre walk among nature to reach the waterfall, due to the lack of proper roads.

The Bheemunipadam waterfall, meanwhile, is famous for its rainbows during sunrise and sunset. It also has a 10-kilometre-long cave that tourists can explore.

As per local traditions, it is believed that bathing in the waterfall can be therapeutic as the water mixes with rare medicinal herbs on its journey.