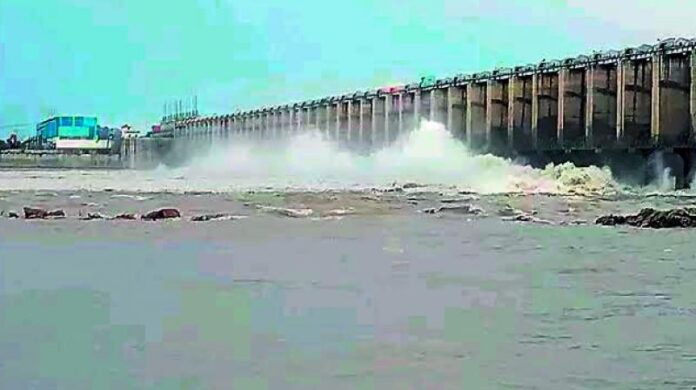 The state has received an average rainfall of 39.5 mm, against a normal of 6.7 mm, recording a deviation of around 490 per cent this monsoon.

HYDERABAD: Two pump houses under the Kaleshwaram lift irrigation project were submerged in floodwaters of the Godavari in Mahadevpur mandal of Bhupalpally district on Thursday, as heavy rains continued to lash the state for a seventh consecutive day on Thursday, July 14, a report in the Decccan Chronicle, says.

Meanwhile, the situation at the Kadem project in Nirmal district normalised after the water receded, but the situation in Bhadrachalam remained perilous as the water level of the Godavari touched 62.2 feet, the highest since the formation of Telangana.

The state received an average rainfall of 39.5 mm, against a normal of 6.7 mm, recording a deviation of around 490 per cent this monsoon.

However, irrigation officials said that submersion of pump houses is a common occurrence and dismissed concerns over the incident.

The adviser to the government on lift irrigation projects, Penta Reddy, in a media statement, said that the Kaleshwaram project construction works are intact and only motors and electrical equipment were submerged.

In Nirmal district, authorities heaved a sigh of relief over the situation at the Kadem project, as officials and residents spent a sleepless night over fears of a dam breach due to excessive floodwater load.

The floodwater inflow at the Kadem project receded on Thursday morning, from 5 lakh cusecs to 2.5 lakh cusecs, and further declined to 1.84 lakh cusecs in the evening. But, the situation at Bhadrachalam remained perilous, as 19.1 lakh cusecs of floodwater were being released into the Godavari.

On Thursday, chief secretary Somesh Kumar held a meeting with officials at BRKR Bhavan and took stock of the situation across the state. He emphasised operations in Mulugu, Bhupalpally and Bhadradri-Kothagudem districts due to the alarming rise in the water level of Godavari.

The Telangana government has announced education institutes in the state will remain closed till Saturday because of continuous rain that inundated low-lying areas and damaged road links in several places.

The India meteorological department, meanwhile, predicted heavy to very heavy rains for the next couple of days in the state, following which officials said that the level of Godavari at Bhadrachalam may cross the 70-foot mark on Friday.

Across India Incessant showers  have caused landslides and floods, country leaving at least 17 people dead on Wednesday while thousands more were forced to move to safety as rivers swelled and water reservoirs filled up fast.

Rains, however, continued to elude Delhi as the city has so far recorded 148.2 mm of rainfall against a normal of 149.7 mm since June 1. Despite light rains in the morning, high humidity, oscillating between 68 per cent and 95 per cent, prevailed during the day.

In the west, heavy showers in parts of south Gujarat and Kutch-Saurashtra regions since Tuesday left 14 people dead, while over 31,000 were evacuated so far this season.

Heavy rains have also led to a rise in the water levels of various reservoirs in the state, with 30 of them being filled up to 70 per cent or more out of their total storage capacity.

Rains, however, continued to elude Delhi as the city has so far recorded 148.2 mm of rainfall against a normal of 149.7 mm since June 1. Despite light rains in the morning, high humidity, oscillating between 68 per cent and 95 per cent, prevailed during the day.

Rains have wreaked havoc in Maharashtra, causing a landslide in the Palghar district that killed a man and his daughter while four people were swept away in overflowing streams in the Gondia district.

Both Palghar and Gondia districts have been witnessing very heavy rains since Tuesday night that inundated low-lying areas. Following the landslide in Palghar, at least 40 families in the neighbourhood of Waghralpada have been shifted to safety.

As many as 200 families were shifted to safety in Nanded district as the Painganga river started overflowing owing to continuous heavy downpours for the last three days. Road links to 26 villages in the district have been cut off due to floods, officials said.

In Gadchiroli too, 2,000 people from 19 villages were shifted to safety as the Godavari, Kaleshwaram and Indravati rivers are at spate while the Wainganga, Pranhita and Wardha rivers are flowing near the warning level in the district.

As rains continue to wreak havoc in different parts of Karnataka, Chief Minister Basavaraj Bommai said 32 people have lost their lives so far and Rs 500 crore will be released immediately to restore the basic infrastructure.

Rivers in the region have swelled, several dams have reached the brim and there is severe waterlogging in agriculture fields and low-lying areas causing damage to crops and properties. Similar is the situation in adjoining districts of Shivamogga, Chikkamagaluru and Hassan.

In Odisha, very heavy rains battered many parts of the coastal state, causing a landslide in the Gajapati district that damaged at least 10 houses while major roads in Malkangiri and Kalahandi districts were damaged.