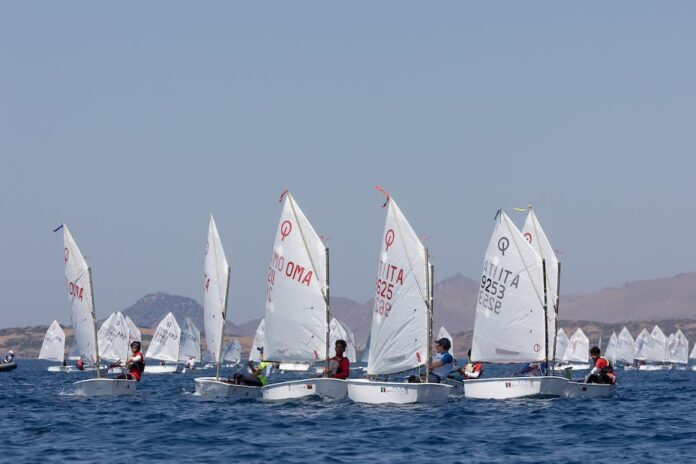 The team competing at the Marina MIlitare Nastro Rosa Tour 2022 in Italy had to contend with low wind and technical issues throughout the competition which impacted several stages, finishing tenth in a close-fought lower half of the fleet.

The team competing at the Marina MIlitare Nastro Rosa Tour 2022 in Italy had to contend with low wind and technical issues throughout the competition which impacted several stages, finishing tenth in a close-fought lower half of the fleet.

Meanwhile, the team of five Oman Sail Optimist sailors also encountered tough conditions in Bodrum, Türkey, at the 2022 Arkas Optimist World Championships, finishing in the lower half of a very strong fleet.

The Tour began in Genoa in Northern Italy and headed south, to Sicily and around the Mediterranean Coastline before heading north to Venice where racing concluded.

Ibtisam Al Salmi said, “This has been a tough event but very enjoyable. We have learned a lot as a team and been able to gain experience on another new class. Despite the difficult weather and technical problems, we have enjoyed our time here and gained a great introduction to this type of race. Adding in the Wing Foil and Waszp for the first time made this an interesting tour for the whole team and we look forward to returning next year and continuing our journey.”

The Tour began in Genoa in Northern Italy and headed south, to Sicily and around the Mediterranean Coastline before heading north to Venice where racing concluded

The youth sailing team joined 286 sailors representing 62 countries at the B. B. Bodrum Sailing Club for the 2022 Arkas Optimist World Championships. Early races were challenging due shifting winds and the team struggled to recover after a slow start while the leaders also toiled in low wind.

Mohsin Al Busaidi, Oman Sail’s Head of Youth Sailing Pathway, said, “This was a tough competition for our team against some of the very best Optimist sailors in the world. Together with coach Suhail Al Mayahi and team lead Abdulaziz Al Shidi, we have worked with the team to prepare for the championships and will continue our work with more competitions on the horizon. This has been a valuable learning experience for us all and will help us to perform at a higher level in the future.”

The team now moves on to Sønderborg, Denmark, for the Optimist European Championships from 30 July-6 August.

Operating under Oman Tourism Development Company, Oman Sail is tasked with rekindling the country’s maritime eminence, promote the Sultanate around the world through sailing, contribute to the sustainable prosperity of the nation and provide long-term learning opportunities for the youth.

Since 2008, Oman Sail has built a solid foundation around Sailing, Tourism, Commerce, Health and Environment, all underpinned with competency-based development for its workforce.

Committed to offering both men and women equal opportunities to learn, Oman Sail’s programmes focus on nurturing young talent to develop the sailing champions of tomorrow, increasing revenue in the tourism, activity and experiential learning markets and gaining prominent international exposure for the country.

The company has a strong track record in delivering a portfolio of events across the Sultanate to showcase Oman’s natural beauty, tourism potential, the people’s hospitality, and the infrastructure readiness for business opportunities. More information can be found on www.omansail.com

More information can be found on our website: www.omansail.com

Stay up to date: